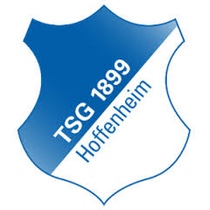 Thank you for shopping for Hoffenheim Football Shirts and Jerseys at Soccer Box. If you are looking for home or away Hoffenheim shirts you are looking in the right place. We stock the football shirts to fit adult sizes in size S-XXXL, choose your shirt and order online now

Hoffenheim has had several variations of its title since the clubs foundation in 1899. After receiving new investment, and a surge in the clubs performance in 2007 it was announced that this German football team would now be known as 1899 Hoffenheim. In recent years Hoffenheim’s incredible comeback has ensured that the teams shirts and jerseys has soared in popularity and sell well in Germany and worldwide.

1
per page
Set Descending Direction
34%
OFF

Add the Hoffenheim soccer jerseys and shirts to your shopping cart and continue to shop at Soccer Box!

Up until the 1990’s Hoffenheim was an amateur football team with no international recognition and only a band of local supporters. In 2000 the fortunes of the club dramatically changed when Dietmar Hopp invested into the club. Hopp had ambitions that would see the Hoffenheim football team rise from the 5th tier of German football to the Bundesliga in only 8 seasons.

This spectacular turn around has certainly increased the recognition and fan base of Hoffenheim. The Hoffenheim shirts and jerseys are now sold internationally. Puma has agreed a deal to manufacturer the Hoffenheim jerseys. The Hoffenheim home shirt is blue in color the away shirt is white.

As success has become the team, the number of fans has also increased. The grand ambitions of the club were set clear in 2006 when a new stadium was built. The team’s original ground was the Dietmar-Hopp-Stadion with a capacity of only 5000. The new Rhein- Neckar-Arena was purposely designed and built to seat 30,150 and comply with Bundesliga regulations. The stadium was completed half way through the teams 1st Bundesliga season and is packed with new and old Hoffenheim fans sporting the blue and white, home and away, football shirts and jerseys.

Some commentators have criticised the speed and means of rising from the bottom of the German football league to the top. However, football fans in general see it is a magical story, they have flocked to support the team and buy their Hoffenheim shirts. Many of the fans that shop for the Hoffenheim soccer jerseys remain local to the club, however, you can have your football shirt delivered worldwide from Soccer Box.

The German Bundesliga is becoming one of the most supported football leagues in the world. At Soccer Box we aim to stock a wide selection of football shirts and jerseys for leagues and teams worldwide. Whether you are a football fanatic, a shirt collector or shopping for a gift the Soccer Box store is sure to have some great shirts and merchandise.

As well as Bundesliga clubs we stock Serie A, Premier League, Ligue 1 and national football shirts, browse our store and get some fantastic football shirt deals when you shop at Soccer Box.

Whether you are a veteran fan or a newcomer the Hoffenheim football shirts and jerseys show a true success story, order yours now with fast worldwide shipping!