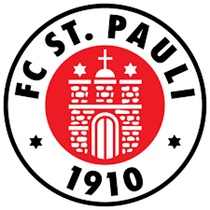 St Pauli is a German football club with a strong ethos that has made them a popular team with supporters not only in Germany but also around the globe. St Pauli plays in the Bundesliga 2, the second tier of German football. Their lack of top tier football hasn’t tainted their supporters and the clubs football shirts retain popularity. As such we have added St Pauli football shirts to the diverse collection of official jerseys that we stock in our online

The history and heritage of St Pauli football club means that they have chosen not to step into the arena of advertisements and heavy sponsorship for financial gains. Instead they play football for the love of the game and for the enjoyment of their supporters. A novel decision in the world of hefty transfer fees, football shirt sponsorship deals and million pound television broadcasting rights deals.

A new board of directors was elected in 2014, and St Pauli could of moved in a new direction, but no, the directors have maintained the much loved club ethos to the delight of supporters.

However, St Pauli needs a football kit, and a new football kit manufacturer was required. In 2015 the board decided to appoint Under Armour as the designer and producer of St Pauli football kits, a decision that has not gone down well with fans.

The board has gone ahead with the deal despite unrest from traditionalists and the Under Armour logo adorns the St Pauli shirts, kit and accessories. Under Armour is an American Sportswear manufacturer who has led the way in recent years with sporting innovations for excellence and performance.

After a turbulent period in which St Pauli was relegated into the third tier of German football the club has bounced between the Bundesliga and Bundesliga 2 football leagues. Since 2011 St Pauli has been a permanent fixture in the second tier, but a 4th place finish in the 2015/16 season gives hope to fans that the St Pauli shirts may once again be seen playing in the top-flight of German soccer.

We are proud to add the official St Pauli football jerseys to our online store. You can order online with Soccer Box and choose from a range of fast shipping options including worldwide delivery.

In addition to St Pauli football shirts we stock a fantastic range of German team jerseys so browse out store and make us your first choice for all your football shirt shopping requirements.