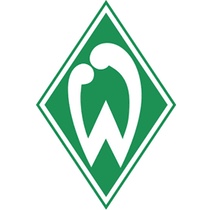 1
per page
Set Descending Direction
26%
OFF

The vast majority of the team’s fans originate from the local Bremen area, however, at Soccer Box we can ship your football shirts worldwide. Whichever, team you support you can wear the shirt wherever you are.

Shop for the Werder Bremen jerseys with express and international shipping options.

Since 2009 American sportswear manufacturer Nike has been producing the Werder Bremen shirts and kits. The traditional colors of Werder Bremen are green and white. Unusually for a football team the home shirt colors have not been rigid. Sometimes the club has a primarily white home shirt, other years it is mostly green. Under the influence of Nike recent seasons have seen a trend toward green home football shirts and a white away shirt.

The Werder Bremen jerseys are exciting and unexpected each season. Sometimes a quartered design is used, occasionally a vertical stripe shirt is released and once a while a truly unique and bold football shirt is chosen. The same can be said for the away football jerseys that have occasionally been blue or orange.

No matter what the design of the football shirts and jerseys Werder Bremen remains a popular club. Match days at the Weserstadion are swarming with fans wearing their Werder Bremen shirts. The Weserstadion was first constructed in 1924 and has been the home of Werder Bremen since. Several renovations have taken place in the intervening years. The stadium now holds up to 42,500 fans.

Werder Bremen has been successful in both German domestic competition and in Europe. The clubs most successful period was in the early 2000’s ensuring a resurgence in sales of the Werder Bremen jerseys. You can order your shirt here and show pride in your favorite German football team.

Werder Bremen Football Shirts and Jerseys Available to Order While Supplies Last, Get Yours Before They Are Gone!