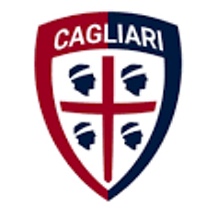 Cagliari Calcio is an Italian football club. The club was founded in 1920 and has spent many years bouncing between the first and third tiers of Italian football, but currently reside in the top-flight Serie A. In our quest to offer our customers the best range of football jerseys available online we have now added the official Cagliari Calcio football shirts to our inventory. Stock is limited though so order yours before they sell out.

For Cagliari the early years of league football were mostly spent in Serie’s B and C, it was not until 1964 that they finally reached Serie A. Finishing as runner-up for the league title in 1969 Cagliari Calcio announced themselves as serious title contenders, and did indeed win their first and only Scudetto in 1970. This was the high point in the clubs history.

Following their dramatic rise to glory the 1970’s saw a slow decline in the fortunes of Cagliari Calcio, and they once again found themselves playing Serie B football in 1976. From that point to the present day the club as jumped from league to league dipping as low as Serie C1 and back up to the top-flight never cementing their presence in any particular league for too many seasons.

Cagliari is the biggest club on the island of Sardinia but the erratic performances has seen a dip in supporter numbers and match attendances. Their home stadium is Stadio Sant'Elia, which was built in 1970 following their Serie A victory, and in anticipation of increasing success for the club. The format of the ground has changed through renovation over the years and currently has a capacity of 23,486. However, with dropping numbers often only hosts around 9,000 football supporters.

One consistency for Cagliari Calcio fans is the clubs blue and red colour scheme. These colours have been iconic to the Cagliari Calcio football shirts and are much loved by the clubs most devoted supporters. Following their promotion from Serie B to A it was announced that the club would have a new football kit manufacturer from the 2016/17 season.

Macron is an Italian sportswear company, and they have agreed a three-year deal to produce the Cagliari Calcio jerseys and kit. Their first incarnation of the clubs kit was released ahead of the 2016/17 campaign, and maintains the clubs traditional red and blue, half and half style home shirt. More modern design features have been introduced into the away and third jerseys, and we look forward to seeing the introduction of more fantastic kits throughout the remainder of the contract between the club and Macron.

We are supplied directly by Macron, and you are shopping for official Cagliari Calcio football shirts. We aim to keep our prices competitive, and we offer worldwide delivery options for your convenience. Browse our store and make Soccer box your first stop for Cagliari and other Italian Serie A football shirts, kit and merchandise.