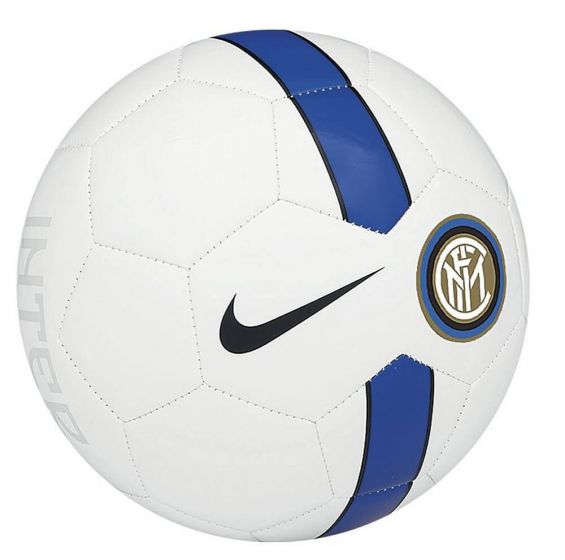 Details
Now at Soccer Box is the Inter Milan Nike Soccer Ball (Football) 2014 – 2015 (White). This football is official Nike merchandise; with two printed Nike swooshes on the ball.
The main color of the ball is white with a blue and black strip going around, presenting the Inter Milan colors. On opposites side of the ball there is the word ‘Inter’ featured in a light grey, making it look current and still having similar colors to Inter.
Inter Milan Nike Soccer Ball (Football) Key Features:
• Ball is white in color
• Printed crest is featured twice on the football.
• Black Nike swoosh printed twice.
• Ball is machine stitched panels
• Inter featured twice in grey
• Official Nike merchandise
• 26 panel ball
This Inter Milan ball will have great durability due to machine stitched panels, meaning that the panels are stitched strongly together. Having 26 panels the ball is less likely to come apart as there are more panels.
This football is officially supplied and manufactured by Nike. When designing this football they have included the colors, white, blue and black. Gold only appears in the crest. The crest has the letters ‘I’ ‘M’ ‘F’ ‘C’ incorporated together to create a unique design and detail. The letters stand for Inter Milan Football Club.
Inter Milan ball club is a professional football team who base themselves in Milan, Lombardy. They can also be known as simply Inter. Along with three other football teams they are the only association to have played in the top flight of Italian football for their entire history, this started in 1929 – 1930.
Although the basic detail, this football looks very professional and it is clearly visible that it is part of the Inter Milan merchandise.
To go with this football there is also many more Inter Milan Merchandise available on our site. Hurry as stock is selling quick!
Size Chart