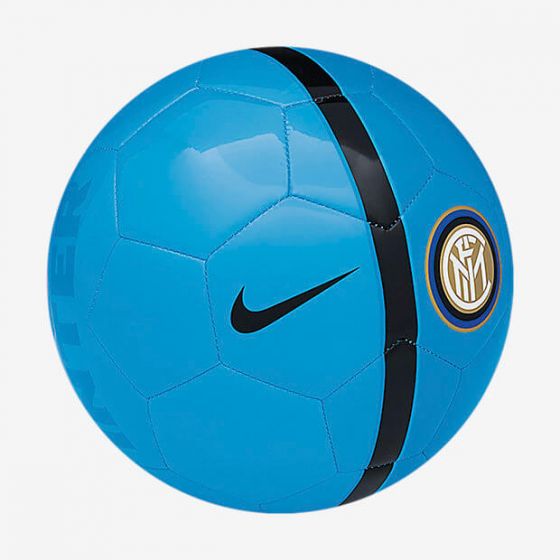 The new soccer ball is available in store from Soccer Box today in sizes 4 and 5, meaning its ideal for kids and adults to show off their support for the blue size of Milan.

The football is designed and manufactured by sportswear company Nike, who are also responsible for Inter Milan’s football kits this season. Their official club merchandise comes to us at Soccer Box direct from their European distribution center thanks to our licensing agreement to stock their authentic football products.

Order from us today and we’ll send your gift item out on a fast international shipping service. Our orders go all over the world so wherever you are you won’t miss out! We offer free UK shipping if you spend over £75, we charge no tax to customers from the USA and other non-EEC areas, and you can still add on discount codes on top of that for a fantastic deal.

Shop with Soccer Box today for an easy purchase and a reliable service!

Inter Milan is a team full of talent that can’t find their feet at the moment. Back to back defeats against the likes of bottom team Cagliari followed by a 3-0 thrashing by rivals has put the Internazionale charge up Serie A on hold. New signings like Nemanja Vidic were expected to add a level of experience and composure to the team but so far the gelling process is still raw and mistakes are being made by all defenders. If Inter want to climb above city rivals AC Milan and challenge for the title they need to grind out some careful 1-0, 2-0 wins to demonstrate their discipline and composure as a top side.

The Inter Milan Supporters Soccer Ball (Football) 2014 – 2015 is a bright blue football with a navy line going all around the ball. It’s a replica match ball used for training and publicity purposes by the Inter Milan players – suitable for fans to grab hold of and show off their appreciation of the club. The classic stitching of the soccer ball means that this is an affordable club accessory rather a high value genuine match ball.

The football has the Nike and Inter Milan logos on, as well as a faint INTER name across the side of the ball. The ball requires inflating and does state that it needs a moist needle to avoid damage to the air hole. The Nike football is made from 100% TPU – Thermoplastic Polyurethane – which is a resilient material idea for a leather like feel that’s good for bounce and handling wear and tear, as well as things like oil and grease.

Visit the Inter Milan football shirts department for the latest home, away, and third football kits as well as training wear and club merchandise, such as accessories and souvenirs.