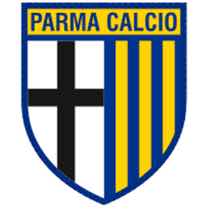 Brand new to the Soccer Box shop we have the official football shirts for Parma Calcio. We are supplied directly by Errea and you are shopping for a genuine Parma football shirt. We have adult size jerseys in stock and offer fast worldwide delivery options. So, get ready for your teams next Serie A fixture and order your Parma jersey today.

Parma Calcio 1913 has a long and storied history. The clubs most successful period was the decade between 1992 – 2002. During this time they secured a their highest ever Serie A finish, runner-up in the 96/97 season, lifted eight trophies as follows:

As can be seen from this varied list of honours, spread through both domestic and European competition Parma Calcio was a football club to be feared. The Parma football shirt was revered and honoured by fans and foes alike.

However, in 2003 the club’s fortunes changed. Financial woe and eventual bankruptcy tainted the image and hindered their success. In 2015 Parma Calcio eventually declared bankruptcy. They were re-founded and demoted into the 4th tier of Italian football Serie D.

It seems though that the fortunes of Parma Calcio and their football shirt clad supporters may be on the rise. As of the 2018/19 campaign Parma Calcio are officially back in the top-flight Serie A league. The club has battled their way back securing a record three-successive promotions to confirm their place, and to celebrate we have added the Parma soccer jerseys to our online inventory.

During their decade of success, the team primarily wore a blue and yellow home shirt, and this is now synonymous with the team. However, recent events at Parma Calcio have forced the club to re-adopt the white home jersey with black cross on the front. The 2018/19 home shirt is white and you can shop for yours in our online store.

Blue and yellow will always be symbolic for Parma Calcio and as such, if those colours aren’t chosen for the home kit, they are always used for away fixtures. The current kit is designed and manufactured by Errea, who have done a fantastic job with the home, away and third options. Whichever shirt you prefer you can order yours today.

Here at Soccer Box we stock a large range of official football shirts, kit and accessories. The Parma football shirt is one of the newest additions to our online store, and stock is limited so avoid disappointment and get yours today. Why not sign up for our newsletter? You will get special subscriber discount codes and offers, as well as news about the latest Serie A kit releases and more.