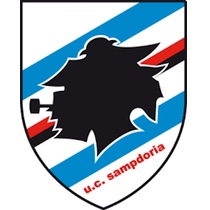 Here is the Sampdoria Football Shirts and Accessories shop at Soccer Box. Sampdoria is an Italian football club. The club is relatively new compared to some of the other team’s in the Italian Serie A, as uniting 2 other clubs in 1946 formed it.

The Sampdoria jerseys for the home kit is traditionally blue with hoops of white, red and black incorporated into the design. The Sampdoria shirts and jerseys feature this unique design that has been popular with fans throughout the history of the club.

The home stadium of Sampdoria is the Stadio Luigi Ferraris. This stadium is based in Genoa, which is also home to the team’s biggest rivals Genoa FC. On Derby della Lanterna day the streets of Genoa are packed with fans of both sides. The 36,536 seat stadium is usually filled to capacity. Sampdoria football kits fill the stadium along with the team’s supporters.

Sampdoria is a popular club with a large number of fans despite not frequently winning any major trophies. Sampdoria’s greatest success was winning the Serie A in 1991. They have also won the Coppa Italia 4 times. Sampdoria soccer jerseys remain popular in Italy, particularly in the Genoa region.

Whether you live in Italy or not, you can support Sampdoria and order your football shirts and accessories here. The team also has a small following of European fans following their small triumphs in European competitions. In 1990 Sampdoria won the UEFA Cup Winners Cup and came as runners-up in the European Cup in 1992. This has ensured that to many football supporters the Sampdoria football tops are recognized and fondly remembered.

As well as Italian Serie A football teams you can shop for football shirts and accessories for teams in many different football leagues around the world. Do you also have an interest in the Spanish La Liga? Or perhaps you are a collector of football shirts? You may also like to consider using the category menu located above to view our extensive range of team and merchandise available here at Soccer Box!