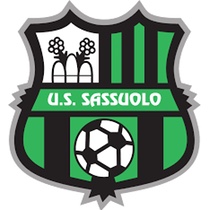 Unione Sportiva Sassuolo Calcio, more usually referred to as Sassuolo, is an Italian football club. They were established in 1922 but have only recently entered the upper echelons of football in Italy. Here at Soccer Box we are proud to be able to offer our customers the opportunity to purchase the latest Sassuolo football shirts. Take a look at the jersey we have available for immediate dispatch and fast worldwide delivery options.

From 1920 to 1968 Sassuolo played in the amateur divisions of Italian football. In the 1970’s the original club merged with other local teams, this is a turning point in the clubs history, which saw their first foray into professional football with promotion to Serie C2 in 1984. Promotion was to be short lived, as the club flitted on the verges of professionalism. It was not until 1998 the Sassuolo returned to the lowest tier of professional football in Italy, and begin their rise to Serie A.

Serie C1 was conquered in 2006, and this was quickly superseded in 2008 with promotion to Serie B, a historical moment for Sassuolo football club. Only five years later in 2013 Sassuolo Calcio made the leap into top-flight Serie A football, and they have since to look back.

Their first season was a difficult one and the threat of relegation loomed, but a last flurry on wins saved them from that threat. 2014/15 saw them finish a respectable 12th, and 2015/16 was simply amazing with a 6th place finish ahead of well-established clubs including Lazio and AC Milan. This placing also secured Europa League football for the first time in the clubs history.

With such a meteoric rise it is easy to see why demand for Sassuolo shirts is increasing with every passing campaign. In 2015 Italian sportswear manufacturer Kappa agreed a six-year deal to design and produce the teams match day and training kit.

We are supplied directly from Kappa’s European distribution centres guaranteeing that you are shopping for a genuine team football shirt. The clubs home colours are green and black, lending their nickname ‘neroverdi’. Kappa produce outstanding designs of football shirt that unite modernity and heritage. Take a look at the jersey we have available for the current season, and order yours online for a hassle free shopping experience.

Historically the home of Sassuolo is Stadio Enzo Ricci, this multi-purpose sports stadium is still used by the club for training but its small 4008 capacity was not deemed large enough once the team reached Serie B. From 2013 Sassuolo has played home matches at Stadio Città del Tricolore. This is a shared-ground arrangement but allows larger crowds, as the stadium has a capacity of 23,717.

Whether you have lived through the lows and highs of Sassuolo Calcio, or you are interested in the Sassuolo football shirts following their speedy rise to the top-tier of Italian football this is the place to order official team jerseys. But hurry stock is limited so avoid disappointment and order now.