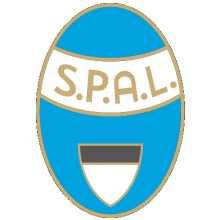 Thank you for visiting the S.P.A.L Soccer Shirts and Jerseys page here at Soccer Box. View our variety of authentic sportswear across the years which are adorned with the SPAL crest. All delivered direct from the manufacturer and available in a selection of sizes; these tops are the highest quality garments on the market. Get value for money and place your order today! Shipping worldwide, you can receive your new football shirt rapidly!

Standing for Societa Polisportiva Ars et Labor, S.P.A.L was first established in 1907 in Ferrara. However, back then they were known as Circolo Ars et Labor as it was originally a cultural and spiritual group which was formed by the Salesian priest. Soon after this in 1913 this is when they chose the name SPAL and began playing in the Italian Football Federation.

After many years playing soccer, SPAL unfortunately went bankrupt in 2005 which meant that they had to regroup at SPAL 1907 s.r.l. Just 7 years after this fiasco the club went bankrupt again and was reintroduced as Societa Sportiva Dilettantistica Real SPAL. And finally, at the end of 2013 the team took back their original name from 1913 – SPAL. Therefore the club has been known by various names over the years but still holds a dear place in supporter’s hearts through their hard times, which makes the dedication of the fans so inspiring.

Their signature blue and white striped home shirt will be seen all across the stands at their grounds called Stadio Paolo Mazza. Seating over 13 thousand spectators, this stadium still resides in Ferrara where the team first began all those years ago.

At the moment SPAL are currently playing within the top flight Italian football league – Serie A. However, prior to this they have also take part in a number of tournaments within Italy before working their way up. So below we have had a look into the history of SPAL and their performance and wins during key seasons across the years.

Prior to the beginning of the 2017/18 season, SPAL signed a manufacturing partnership contract with Macron. Scheduled to last four years, this is expected to come to an end around 2021. This deal has been made between the sports brand and the soccer team to enable Macron to produce the home, away and training wear of this Italian club.

Unfortunately, they have not disclosed the financial details of this contract, however we do know that there is a strong Macron presence within the Stadio Paolo Mazza. As 2017, SPAL had finally made it to the Serie A tournament after 49 years, therefore the spectatorship and club pride for the team as they progress is certainly going to widen the exposure of Macron too.

Manufacturers through the Years

S.P.A.L has worked alongside a number of sportswear brands over the years that produced their apparel for a number of seasons. Prior to their latest signing with Macron, their partnerships appear to last a relatively long time and they have also re-joined with some companies more than once too.

Looking at the breakdown below we can see that their longest single contract was with Adidas at 5 years, and their longest collaboration with multiple contracts overtime was Asics with a total of 9 years.

There are a number of reasons why you should place your order with us here at Soccer Box for your new soccer jersey. We offer a fantastic range of products which we regularly reduce and we also offer exclusive coupon codes for you to use on our purchase.

Along with this, all of our stock is 100% authentic due to the fact we source direct from the manufacturer. And we also supply our customers with a spectacular range of worldwide delivery methods to choose from at the checkout.

So complete your purchase online or give us a call and you can be wearing your new SPAL home shirt in no time! Get them here today while stocks last!