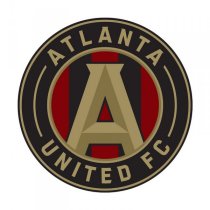 Here at Soccer Box we are proud to stock the Atlanta United FC Soccer Jerseys from a variety of seasons. All of our stock is shipped directly to us from their respective manufacturer as to ensure their authenticitiy. As a result of this our customers can shop with ease, knowing they are guaranteed to receive the genuine shirt as seen on their idols. Shop our wide range of jerseys today and choose our express global delivery method at the checkout for speedy shipping.

1
per page
Set Descending Direction
24%
OFF

Therefore, we have only seen a few primary shirt launches for the soccer team. Influenced by their crest’s design, the home shirt worn in 2017/18 was a deep red and black striped base with golden Adidas stripes. The season after this saw minimal changes made to the shirt such as the number of stripes increasing and the golden Adidas stripes changing to red.

The secondary strip for the Atlanta United FC has kept to a red and white appearance with the first jersey worn in 2017 being white with thin black stripes and red trim. And the latest one produced in 2018 was a plain white colour with red Adidas stripes across the shoulders.

Since 2016, the Atlanta United squad has worn the American Family Insurance sponsor on their primary jerseys. The length of this contract between the sponsor and the club has not been disclosed so this could remain the same for seasons to come or could change shortly.

The crest of Atlanta United was styled using a circle template which was reminiscent of the city’s seal. Within the circular emblem were five black and red stripes the are believed to represent the five pillars of the club which are – unity, determination, community, excellence and innovation. In the foreground of these stripes is a large golden A which is bold and perceived to take it’s inspiration from the Olympic heritage of the city.

Although the Atlanta United soccer team has been playing professionally in the MLS for only a couple of seasons, they have still acquired a variety of winners trophies. Their first wins were in the Eastern Conference where they were named the playoff winners in 2018. Along with this, they also came first in the MLS Cup the same year. More recently they have also won the Campeones Cup and the US Open Cup in 2019.

We proudly stock the official Atlanta United FC soccer jerseys for devoted supporters of the club to purchase. To ensure that we are only stocking the authentic kit, we are supplied direct from Adidas. As a result of this, you can feel satisfied that you are going to receive the genuine soccer shirt for your number one team when placing your order online or over the phone with us today. For speedy global delivery we also operate a range of courier and postal services to get your order to you ASAP no matter where you live.