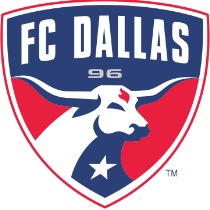 Here at Soccer Box we are proud to stock official football shirts for an array of club and national teams around the globe, and we have now added FC Dallas to the list of teams that we have available. We only stock merchandise and when you order from us you will get an official FC Dallas jersey, so browse the selection of FC Dallas shirts that we have available and place your order online today.

Evolution of the FC Dallas Shirt

FC Dallas is an American soccer club, playing in the MLS. The club was founded in 1995, and was originally known as Dallas Burn, they rebranded in 2004 and has since been known as FC Dallas. This rebrand also affected the styling of the club soccer jerseys and logos.

As Dallas Burn the team’s home shirt was primarily red and black and the club logo was a black mustang breathing fire. Since 2005 the FC Dallas home shirt has featured a red and white hoop design.

The FC Dallas away jersey is most frequently blue, it often mirrors the design of the home shirt, but the red is replaced with blue. There has also been a white away shirt with blue detail released in recent seasons.

The current FC Dallas jersey is manufactured by Adidas, as part of the centralised deal that Adidas holds with MLS to create the kit for every team within the league. This deal is expected to be maintained until at least 2026, so expect to see a great variety of FC Dallas shirts featuring the iconic Adidas 3-stripe logo over the coming seasons.

Currently sponsored by Advocare the FC Dallas football shirt includes their sponsorship branding on the front, this deal is set to run until 2020 at least. The clubs home stadium is known as the Toyota Stadium, due to a long-term branding deal with the car manufacturing giant Toyota. Prior to this it was known as the Pizza Hut Stadium, due to a sponsorship deal with Pizza Hut.

We are supplied by Adidas and when you order from us you are guaranteed to receive the official FC Dallas jersey. Stock is limited though and in high demand, so take this opportunity to place your order online today. We have excellent Trustpilot reviews, secure checkout and fast worldwide delivery options, so make Soccer Box yours first choice for all FC Dallas shirts and merchandise.