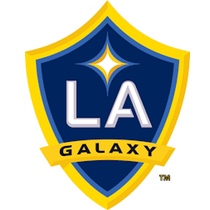 If you are after high quality replica sportswear adorned with the LA Galaxy crest then you are in the right place. Within our LA Galaxy Football Shirts and Jerseys store here at Soccer Box you can browse through our variety of soccer clothing for your beloved team. Available in a selection of adult’s sizes, you are guaranteed to find something for yourself or your loved one right here. And ensuring that you can receive your new football top rapidly, we offer a wide range of shipping services which operate worldwide so that supporters all over the globe can enjoy wearing their LA Galaxy jersey with pride.

LA Galaxy also enjoys a significant following worldwide after their high profile signing of David Beckham in 2007. Beckham’s move across the Atlantic to wear the number 23 LA Galaxy shirt caused a huge rise in demand for the LA Galaxy football shirt in England and across Europe. This signing increased interest in the MLS worldwide and ensured that LA Galaxy is the most well-known team. Demand for LA Galaxy football shirts and jerseys outstrip that of other MLS teams by a significant margin.

Manufacturers of the LA Galaxy Sportswear

The LA Galaxy soccer club was first established in 1994 and is one of the oldest clubs currently playing in the MLS. Therefore this means they were one of the first few to join the Major League Soccer when their first season was held in 1996.

As they have been playing for over 20 years, we expect them to of partnered with a number of manufacturers for their home, away and training kits, however, they have only held contracts with two major sportswear brands. See below for the breakdown of the dates and manufacturers who have produced the LA Galaxy strip:

Adidas currently produces the entire MLS jersey range for all of the current teams playing in the league. And they have also extended their contract recently for an additional six years.

Evolution of the LA Galaxy Shirts

In the beginning LA Galaxy had always experimented with the colouring of their kits, however have tried to remain consistent with a palette to match their crest. Therefore you will be able to see a range of gold, white, navy and teal detailing throughout their kit history. Another common thing seen on their jerseys is a sash across the chest. But this was all to change in 2007 when they welcomed David Beckham to the team. This then triggered the kit evolve from the colour scheme much loved by fans, to white for home and navy for away. They also reduced the addition of teal into the design of the shirt but kept the gold in certain strips.

And as they were updating the look of their sports kit, they also revamped the appearance of the emblem. The LA Galaxy emblem was a black rotated shield with a golden circle and teal font in the middle. Their new look certainly provided them with a crisp and smart appearance by keeping it to a navy shield with white font. They also adapted the crest on the home and away kit in terms of outline, where the home has a pop of gold and the away is grey.

Why Purchase an LA Galaxy Jersey?

As one of the oldest teams in the MLS, they have most certainly gathered a large following over the years and with the addition of David Beckham – spiked their popularity. So why not pledge your allegiance to this highly significant soccer team in the USA today by ordering a jersey donned with the LA Galaxy crest now! An authentic replica shirt will make you feel extra special when cheering your beloved squad on from the stands at Dignity Health Sports Park. As they are one of the most popular teams to follow in American soccer, why not add a jersey to your cart today?

Throughout their time playing in soccer leagues across America, LA Galaxy has won a grand total of 29 tournaments. Below we can see that their most successful time is in the Western Conference games, and shortly behind this are the Major League Soccer and the Supporters’ Shield. They have also won the CONCACAF Champions League once which is a tournament including teams from across North and Central American as well as the Caribbean.

Here at Soccer Box we pride ourselves of stocking authentic replica sportswear of a supreme quality for our customers to purchase. To reach our level of confidence in our goods, we hold contracts with Adidas and Nike who ship us the sportswear directly. Therefore we are able to validate their authenticity to give you peace of mind that you are indeed purchasing the best apparel on the market for your beloved team. And along with our variety of LA Galaxy shirts, you can also buy the USA international jerseys and other MLS team wear within their respective categories today.

Once you are happy with your order, you can head over to the checkout where you can select from our vast range of fast global delivery methods. You can also sign up to our newsletter to receive exclusive coupon codes to use towards your purchase along with a number of fabulous VIP benefits. Just a few of these which are available are new kit alerts and priority access to our sale, signup today using your email address for free!

If you have any queries or issues with your purchase, be sure to give us a call during our opening hours and our helpful staff will assist you!