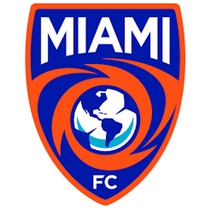 Miami FC is a recently founded American soccer team, and we have added their home and away football shirts to our online store. Take this opportunity to shop for your official Miami FC football shirts at Soccer Box. With the growth of European football in the United States of America new teams are popping up frequently. Miami FC is based in Florida and currently plays in the North American Soccer League.

The North American Soccer League (NASL) is the second tier of football in the United States, with MLS being the top tier. Miami FC was founded as recently as 20th May 2015, and will need to play their way into MLS. The NASL is split into fall and spring seasons. Following their spring debut Miami FC ranked bottom of the league. Miami FC is looking to build a strong band of supporters both in Florida and around the globe, and the ideal way to show that you are fan is with an official team jersey.

Jump onto the Miami FC Supporter Ship and Order Your Shirt Today!

For their debut season Macron is the manufacturer for Miami FC and we are stocking the home and away football shirts. The Miami FC home shirt features a modern sky blue colour scheme with bold orange trim, these are the colours that feature on the clubs crest. The away jersey is white with sky blue accents.

As a new football club Miami FC are yet to secure a sponsor for their football kit and their shirts simply feature the clubs crest alongside Macron logos. A smart v-shaped neckline coordinates the home and away shirts for the NASL 2016 campaign.

Miami FC currently play’s their home games at the FIU Stadium, which is based at Florida International University. In comparison to other stadiums within the United States this is small, with a capacity of 20,000 fans. As demand to watch Miami FC play, and the number of supporters gathering on match days sporting team shirts and kit increases the future may see expansion of this ground or a move to a larger arena in the future.

Be part of the soccer revolution in the United States of America and show your support for the newest member of the NASL, order your Miami FC football shirts from Soccer Box. The home and away jerseys are available for worldwide shipping so place your order online today.