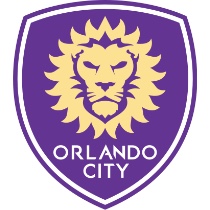 Looking for the latest football shirt for Orlando City? Yes. Then you are in the right place. Here at Soccer Box we stock the official Adidas Orlando City jerseys, so take this opportunity to purchase yours while stocks last. We are supplied directly by Adidas, and you are guaranteed to receive official merchandise when you order an Orlando City jersey from us.

Orlando City is a relatively new soccer club, they were founded in 2013 and play in the Eastern Conference of MLS in the USA. They joined MLS in 2015 and they are the only club in the state of Florida.

With a striking purple and white colour scheme the Orlando City home shirt is appealing to supporters. The clubs crest is purple with an image of a lion’s face surrounded by 21 sun flares to represent the mane. The number 21 reflects the fact that Orlando City were the 21stMLS soccer club, and the sunshine imagery references the ‘Sunshine State’ nickname of Florida.

The purple Orlando City home jersey is the most popular of the club’s shirts, but they also have an away shirt that to date has been white with purple details. As a new club, we look forward to the release of new and excited takes on the purple and white colour scheme over the upcoming seasons.

Manufacturer of the Orlando City Jersey

As per the MLS wide deal Adidas is the manufacturer of the Orlando City football shirts. This deal regulates the release of jerseys meaning that there is only a home and away option, and that there can only be one new jersey released each season.

From the beginning Orlando Health has sponsored Orlando City soccer club, and their logo features on the team’s shirt and other teamwear.

Shopping for Orlando City jerseys is easy at Soccer Box. We stock a range of styles and sizes so pick your shirt, click add to cart and checkout online. We offer worldwide delivery options for your convenience. We are rated best in category on Trustpilot so take a look at our reviews and make us your one-stop shop for all the latest Orlando City football shirts.