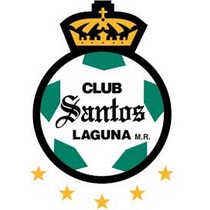 Santos Laguna is a relatively new club in Mexican football, founded in 1987. The club has quickly won the support of many fans particularly in the local Laguna region. In recognition of their large fan base, and success in Liga MX we are now stocking the official Santos Laguna football shirts. These jerseys are available for worldwide shipping, but stock is limited so avoid disappointment and place your order today.

Since their debut Santos Laguna has played in the top-flight of Mexican football, and they have won the Championship on five occasions; 1996, 2001, 2008, 2012 and 2015. Despite their late arrival to Mexican football, their success and charisma has earned them much support. Santos Laguna is the fifth most supported football club in Mexico, and 58th in the world.

To begin with the home of Santos Laguna was the Corona Stadium, this was one of the smallest grounds in Mexico having a capacity of 20,100. In 2009 the team moved to the newly build Estadio Corona, which has a capacity of 29,327. Fans turn out in their Santos Laguna jerseys to support the team on match days, such is the popularity of football in Mexico.

Since their inception Santos Laguna has had a green and white stripe home shirt. The stripes are generally horizontal, but on occasion have been placed vertically to offer a different look. The club is twinned with Scottish football club Celtic, who also wear green and white hoops. Unusually the green colour can vary between deep grass green, lighter mint green.

Since 2011 Puma has made the Santos Laguna football shirts. We are supplied directly from the Puma distribution centres and only stock genuine jerseys made to the highest standards. As Puma merchandise the clubs kit utilize dryCELL sporting technology for exceptional performance on the football field, making the Santos Laguna shirt ideal for cheering on the team as well as playing soccer.

Santos Laguna shirts commonly feature multiple sponsors. Prior to Puma taking over as the kit manufacturer it was rumoured that a deal would be made with American sportswear company Nike. However, a deal couldn’t be agreed as one of the conditions was that the club would get rid of its eight sponsors. The current jersey features multiple sponsors on both the front and back as well as on the sleeves.

One of the biggest matches in Mexican football is that of Santos Laguna and C.F. Monterrey (whose shirts we also stock). This game is fraught with rivalry and often includes violent episodes. Both of these teams have been successful in Liga MX over recent years, and are consistently vying for position in the league table.

Despite it’s relatively short history Santos Laguna has made a big impression on Mexican football. If they are you’re local club, or you follow them from afar take this opportunity to grab the latest Santos Laguna football shirts. Shopping with Soccer Box is easy and hassle free, so order online today.