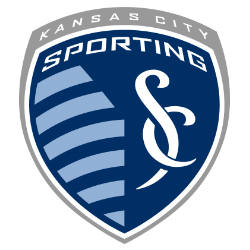 The well-known crest of Sporting Kansas City has a number of meanings hidden within its stylish design. The teardrop shaped emblem is a stylized representation of the Kansas and Missouri State line. In the centre of the crest the details are split down the middle to emulate the support of Sporting Kansas City across both states with the right-side representing Missouri and the left being Kansas. The left side of the emblem contains light blue and navy stripes which represent the eleven players on the field. And on the right the SC monogram stands for Sporting Club which was inspired by the Asclepius rod, Winged Victory of Samothrace and the Spanish architecture of Kansas City which have connotations of strength, movement, health and fitness.

The Sporting Kansas City kit has been produced by Adidas for a number of years and through which they have gone on a journey of establishing the club’s signature look. Before they developed their core sporting blue and dark indigo colour scheme in 2011, the club has experimented with a variety of colour ways. Their first home jersey was produced in 1996/97 and was decorated with navy, teal, red and white diagonal stripes with a black base and blue sleeves. Moving on from this they also sported a black shirt with multi-colored zig zags across the chest the season after. It was in 2000 that they started to use a bright blue and white colour way which they used up until 2008 where they made the base a darker blue and added a pop of yellow.

Formerly known as Kansas City Wizards, the Kansas City soccer club was founded in 1995. Since then they have acquired a range of soccer awards in the Western Conference and across the MLS tournaments. Showcase your support for your favourite team this season by donning the replica jersey to the players. As seen across the stands at Children’s Mercy Park, you too can pledge allegiance to the Wizards with pride. Below is a breakdown of the trophies and awards earnt by Sporting Kansas City over the years.

Along with these achievements we can see that in the past few years the club has struggled to make it past the CONCACAF Champions League group stages. However, after their latest performance in 2019 they made it all the way to the semifinals but lost out to Monterrey. The last time they had done this was in 2002 and since then they have only made it to the quarterfinals in 2013/14. With these results in mind, the outlook for Sporting Kansas City is looking impressive. They also came 3rd in the 2018 MLS after coming 1st in the Western Conference.

Show off your team pride with honour this season by ordering a matching jersey to your favourite soccer team in the MLS. We have received our shipment of these Sporting Kansas City direct from Adidas so that we can verify their authenticity to give you peace of mind that you are investing in the official kit for your number one team. Catering for Sporting KC fans worldwide, we offer a fantastic range of speedy international shipping methods to suit a range of requirements and needs. Place your order with us today and you could be donning your new shirt in no time.