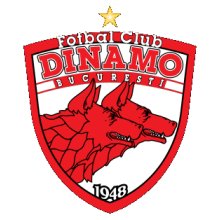 Thank you for viewing the Dinamo Bucuresti Football Shirts and Jerseys page here at Soccer Box. Within this store you will find the latest soccer tops in a selection of sizes for your beloved team. Feel like your idols by donning this jersey to their future matches in the Liga 1 and place your order today for an authentic replica item of sportswear!

Dinamo was first formed in 1948 and was originally merged with Ciocanul Bucuresti as part of the Internal Affairs Ministry. Soon after this, in 1956 the soccer team played within the newly established European Champion Clubs’ Cup. This achievement for the club made them the first ever Romanian team to play within a European tournament.

At the moment the club plays its home fixtures at the Stadionul Dinamo in Bucharest. In the first few years it was able to seat 16,000 spectators, but after they had invested in seating for the fans, this number was decreased considerably and lost over 1,000 spaces. Also within this stadium it also houses the second team’s grounds which are also shared with rugby players.

At the moment Dinamo are playing within the Romanian soccer league – Liga 1. Prior to this they have also joined a number of tournaments and seen a large amount of trophies come their way. Below we have broken down each league they have played within and how successful they have been within it. As you see below, their most outstanding performances have been within the Liga 1 where they acquired 18 wins, and closely behind is the Cupa Romaniei at 13 wins.

Signing the Contract with Macron

At the end of the 2017/18 season, Dinamo signed a manufacturing agreement with Macron. Expected to last for 3 years, this contract is sure to see them into 2021. Enabling Macron to produce the sportswear ranges of Dinamo, this collaboration adds to the top flight clubs which are working with Macron. Proven to be a popular team within Romania, Bucuresti have had a successful history and have built a strong relationship with its fans. And by partnering with Macron, the brand is sure to receive a widely loved level of exposure for their innovative designs.

As the club has only been around for approx. 70 years, they are still relatively new to the football world compared to some of their competitors. However, they have been able to acquire a number of contracts with well-known sports brands to produce their club’s kits. Within the bullet points below we have been able to roughly breakdown the manufacturers who have worked with Dinamo across t the years.

Why buy your Soccer Jersey from us?

Delivered direct from the respective manufacturer, our entire stock has had its authenticity assured thanks to this route. As a result of this, shopping with us becomes a breeze as you know you are certain to be purchasing an official replica shirt adorned with the Dinamo crest. So while stocks last, why not look into getting yourself the latest Dinamo Bucuresti home shirt before it sells out?

Our selection of shipping methods strives to ensure that Dinamo customers all over the world can be wearing their new item of key sportswear in a matter of days. Operating at express rates internationally as well as in the UK, there is a service guaranteed to meet your needs.