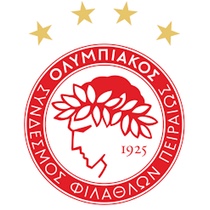 Welcome to the Olympiakos Football Shirts store at Soccer Box. This is your go to place to shop for all your official Olympiakos jerseys and accessories. Available in a variety of sizes and designs, you are certain to find the best fit for you, your friends or family. Take a look around now and uncover our ranges of excellent quality replica shirts for your cherished team now.

Established in 1925, Olympiakos recently celebrated their 90 years of soccer success in 2015. The club was initially formed from the merger of two other soccer teams based in Piraeus.
Built in 1895, the Karaiskakis Stadium is Olympiakos’ home grounds. Designed to hold a capacity of over 32K fans, you are guaranteed to see the stands full of devoted supporters wearing the Olympiakos home shirts. Red and white have always been the team’s home kit colours. Red was chosen to represent passion and victory, white is said to represent virtue and purity.

To ensure that our customers receive high quality replica Olympiakos jerseys, we source our entire stock straight from the suppliers – Adidas. In 2015 Olympiakos signed their third contract with this German sporting goods brand. However, the details regarding the price and length for this agreement have not been disclosed. Adidas therefore are the current manufacturers of the club's home, away, training and accessories ranges.

Order from us today and you are guaranteed to receive an authentic replica jersey for your beloved team. Sure to be a fast seller, place your order today for the Olympiakos home football shirt. Make sure you check back regularly as we often reduce previous season's stock, so you can purchase a new jersey for yourself at a fraction of the price!
Here at Soccer Box we offer a full range of shipping options. Get your shirt shipped using the next day UK service, expedited International delivery or standard options to suit your needs now. Therefore wherever you are located in the world, you can receive your order in a matter of days.
FILTER
Shopping Options
Category
Compare Products
Compare
Clear All
You have no items to compare.