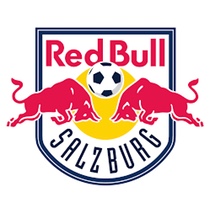 FC Red Bull Salzburg is an Austrian football club that was initially founded in 1933. However, in 2005 the club was added to the Red Bull GmbH empire and re-branded, it is now commonly referred to as RB Salzburg but due to sponsorship restrictions enforced by UEFA is referred to as FC Salzburg in European competition. We have now added the RB Salzburg football shirts to our online inventory, and you can order yours today with worldwide delivery options.

Prior to take over by Red Bull GmbH FC Salzburg had a series of successes in the Austrian Bundesliga, to which they were first promoted in 1970. They were back-to-back champions in 1994 and 1995 and added a 3rd title in 1997. During the 1990’s the club also won the Austrian Super Cup on three occasions, and were UEFA Cup runner-up in 1994.

Much to the disgust of the clubs supporters the Red Bull takeover didn’t just present a new sponsorship for the newly named RB Salzburg but a complete re-brand with new crest, and new colours, and the ideology of it being a new club with no history. This has angered some fans so much that they have split away from the club.

However, for others the rebranding has been a positive move. Since the 2005 takeover RB Salzburg has added a further seven Austrian Bundesliga titles to its tally, along with four Austrian Cup titles. However, their success in the Austrian football league is yet to be duplicated in European competition.

As previously mentioned the new RB Salzburg also adopted a new colour scheme. Previously the club had worn a distinctive violet and white home shirt, but these along with the club crest were immediately scrapped when Red Bull GmbH took over management of the Salzburg club.

A new crest was introduced, to include the Red Bull logo. This is modified to include wings to represent the slogan ‘Red Bull gives you wings’ for use in European tournaments. The home shirt was changed to white, with red and blue accents similar to the look of other football and sports teams owned by the corporation.

Adidas was teamed with Red Bull to manufacturer it’s sports teams football kits, but in 2014 they agreed a new deal with Nike, which subsequently means that it is the Nike logo that adorns the current RB Salzburg jerseys. The home and away football shirts reflect the now iconic look of Red Bull and feature the same design elements as other football and sports teams within the growing group.

What is your opinion of the new RB Salzburg? Was the takeover a positive move? Find us on social media to share your thoughts. And take this opportunity to pick up official RB Salzburg football shirts. We are supplied directly by Nike ensuring that you are shopping for genuine team jerseys. Hurry we only have limited stock so place your order using our secure online shopping cart today.