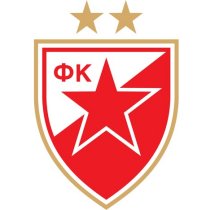 You are now viewing our Red Star Belgrade football shirts and jerseys store here at Soccer Box. Below you will find a variety of sportswear adorned with your beloved team’s crest to help you display your support for them with ease. Despatched straight from the respective manufacturer, direct to our warehouse, you can be assured that all of our stock is 100% authentic.

Established in 1945, CZV has been around for 73 years. Currently playing in the Serbian SuperLiga, they have also played in a number of leagues prior to this. Before the SuperLiga was formed in 2006, Red Star Belgrade has also played in the former Yugoslav First League (1946-1992) and the First League of Serbia and Montenegro (1992-2006).

At the end of WWII, most of the Yugoslav clubs were disbanded because they had taken part in fixtures during the war and were therefore given the name of ‘collaborators’ by communist authorities. And the soccer team of Belgrade which at the time was called SK Jugoslavija was one of those.

Soon after this, Red Star was formed from what was left of the club’s players and from then they adopted the signature red and white colours seen still today for their home strip. However, they do not use this significant design on their away and third strips, but they still keep to the colouring of the Serbian flag.

Currently, their home ground is the Rajko Mitic Stadium which seats around 55,538 spectators comfortably and was re-built in the early 60s. When attending this venue to watch Red Star Belgrade play, a sea of red and white stripes will be visible as the fans provide a united front to cheer on their well-loved soccer team.

Throughout the years, Red Star Belgrade has acquired a number of trophies within the Serbian soccer leagues. Their most recent win was the Serbian SuperLiga in 17/18 and they have won an outstanding 19 trophies in the Yugoslav First League. See below to explore the breakdown of the club’s successes over the years.

As of 2017, Macron signed a contract with the Serbian soccer team to produce this home, away, third, training and accessory ranges. This collaboration is set to last for 5 years which will take them up to 2022 together. However, the fees of this agreement have not yet been disclosed to the public.

When signing this contract with Macron for 5 years, this is most possibly the longest standing sportswear manufacturing agreement the club has held consecutively with one brand.

Prior to the recent designing of the soccer wear by Macron, CZV have partnered with a variety of football clothing brands over the years. And below are just a few of these which they have worked with for a number of years at a time.

Within this page, you are able to view our extensive range of the latest and historic CZV sportswear we have to offer in a selection of adult’s sizes. As mentioned previous, all of our stock is sourced direct from their producers in order for us to be able to validate the authenticity of our apparel. As we strive to provide our customers with the highest quality replica clothing to their soccer idols.

At the checkout we have a spectacular variety of shipping services which operate internationally as well as locally to ensure that your order reaches your door as fast as you need it. As our stocks are very limited for the Red Star Belgrade home shirt, we highly recommend that you complete your purchase today online or over the phone to make sure that you secure yourself one of these fantastic jerseys while supplies last!