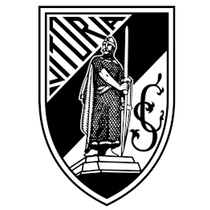 Vitoria Sport Clube (Vitoria S.C) is one of the best supported football clubs in Portugal, and they play in the top-flight Primeira Liga. And you can now shop for official Vitoria S.C. football shirts here at Soccer Box. Take a look at the jerseys we have available and order online using our secure shopping cart, but hurry supplies are limited so don’t delay and order today.

Vitoria S.C. was founded in 1922, and have a long but turbulent history of football within Portugal. It wasn’t until 1941 that Vitoria S.C was promoted to the Primeira Liga. The turn of the century marked the toughest period for the club. Issues with the clubs leadership including their president being accused of embezzlement created a difficult environment at the club.

A Turbulent Era for Vitoria S.C.

Despite the issues 2005 saw Vitoria S.C. secure a 5th place finish, however, this success was short lived as the club was relegated to the Segunda Liga in 2006, their first stint in the second tier of Portuguese football since 1958. This drop only lasted a single season and in 2007/08 they were not only promoted but finished third in the top-flight.

In Portugal football is dominated by the ‘Big 3’, however, Vitoria S.C. has consistently vied for position and are currently the fourth best supported club in the country. In fact they have ousted the big three clubs on four occasions to finish 3rd place in the Primeira Liga table, as already stated the most recent occasion was in 2008. The main aim each season for the club is to finish in one of the top-five positions to ensure a place in European football competition.

The home of Vitoria S.C. is the Estádio D. Afonso Henriques. The stadium was first opened in 1965, it was renovated in 2003 as part of the infrastructure for Euro 2004 and now has a capacity of 30,165. The club often attracts some of the highest supporter numbers in Portugal with frequent match attendances of 20,000 fans.

As is common with football clubs around the globe fans often choose to wear the home and away jerseys as a sign of support. From the start of the 2016/17 season Italian sportswear manufacturer Macron will be producing the Vitoria S.C. football shirts and kit. They have agreed a five-year deal, which will last until 2021.

We are a licensed retailer for Macron products, and can now offer you the chance to get the latest Vitoria S.C shirts here at Soccer Box. We only stock official merchandise ensuring that you are shopping for genuine team jerseys. Take a look at the products we have available and order your Vitoria S.C football shirt while supplies last. We offer worldwide delivery options, so take this opportunity for hassle free shopping and order online today.