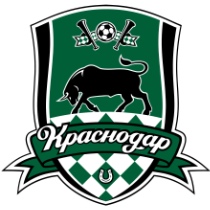 Manufacturer of the FC Krasnodar Jersey

In the early days of FC Krasnodar from 2008-2016 Kappa manufactured the FC Krasnodar football shirts and technical kit. In 2016 it was announced that German sportswear manufacturer Puma would take over as the club’s kit supplier. Neither FC Krasnodar nor Puma released any further detail regarding the financial details of the deal of the length of the contract. Currently as of 20/21 the new FC Krasnodar home shirt has recently been released by Puma and is available to purchase in our online store.

Since the club’s inception, FC Krasnodar has worn a green home shirt, often featuring black and/or white accents; the shade of green has varied between lighter and darker depending on the overall aesthetic of the design. The FC Krasnodar away shirt has is usually white with varying amounts of black or green detail. Occasionally FC Krasnodar has also had a third shirt, these have been black and dark grey.  Take a look at the FC Krasnodar shirts currently available in the Soccer Box online store.

In its short history, the FC Krasnodar squad has played at three different home stadiums:

Trud Stadium, the team’s first home, had a small capacity of just 3,000, which they outgrew after being promoted into the First Division. They then shared Kuban Stadium with FC Kuban for several seasons. In 2013 construction began on the club’s purpose build football stadium that was to be known as Krasnodar Stadium.

Krasnodar Stadium has a capacity for 35,074 supporters; and was built at an estimated cost of €200 million. This stadium is fully equipped with a café, museum, club shop and banquet rooms as well as business facilities. If you’re lucky enough to attend matches at the Krasnodar Stadium, a FC Krasnodar jersey is just the item you need to highlight your team allegiance as the squad strive to take their place atop the league.

Soccer Box is supplied directly by Puma, and you will receive an official FC Krasnodar football shirt when you shop with us. We stock the jerseys in adult sizes S-XXL; and have worldwide delivery options for your convenience. Browse out store and shop for your FC Krasnodar shirt while stocks last. Should you require any assistance our help customer service team can be contacted by phone, email or online chat during business hours.