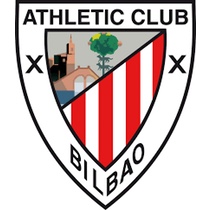 Welcome to our Athletic Bilbao Football Shirts and Jerseys store at Soccer Box. Here you will find a variety of Athletic Bilbao home/away jerseys, shorts, socks and accessories in a range of sizes. Purchase an item of this Spanish soccer team’s merchandise from us today and you can select from our fantastic amount of rapid global delivery methods.

Established in 1898, this Spanish club started as two separate groups of British workers and Basque students. However in 1902 the two teams joined together and became known as Bizcaya temporarily before fully merging a year later and adopting the name Athletic Club.
At the beginning, the team played in an improvised white and blue kit which was donated. In 1909 a student who was returning to the UK was tasked to purchase 25 new blue and white jerseys for the team. However, he could not source enough to fulfil the requirements. Not wanting to return empty handed, he purchased 50 red and white shirts from Southampton, who played in the same colours as the City of Bilbao. This then took over as the Athletic Bilbao home jersey design.
Situated west of Bilbao centre, is the club’s home ground – San Mames, which seats over 53K spectators. As well as this, 15KM approx. North East of here is Lezama Facilities which is the training grounds.

Over their 119 years playing football in Spain, this team has gathered a significant amount of winners’ trophies. Their most successful league is the Copa del Rey where they achieved 23 awards. Below is a breakdown of the amount of achievements Athletic Bilbao has gained in order from most to least.
• Copa del Rey Winners – 23 trophies
• La Liga Winners – 8 trophies
• Supercopa de España – 1984, 2015
• Copa Eva Duarte - 1950

In 2017, Athletic Bilbao signed a 6 year contract with New Balance which is expected to expire in 2023. This contract covers the clubs sportswear ranges such as the Athletic Bilbao home shirts, shorts and socks etc. Rumoured to cost more than the 2.5M a season that Nike was paying, this partnership is the team’s seventh manufacturer change.

Why Order Your Athletic Bilbao Kit from Soccer Box

Purchased directly from the respective manufacturers, we have ensured that our entire stock is authentic. Therefore, when shopping at Soccer Box, you are guaranteed to receive an official item of Athletic Bilbao sportswear for you or your loved one to wear with pride.
As we stock a variety of seasons shirts and kits in a selection of children’s and adults sizes, we recommend that you check back here regularly, as we often reduce previous years stock.
Complete your order today online using our secure payment system or give us a call. No matter, where you are in the world, you order will reach you in a reasonable time period when you select from our extensive list of fast international shipping methods.
FILTER
Now Shopping by
Clear All
Shopping Options
Category
Price
Size
Compare Products
Compare
Clear All
You have no items to compare.