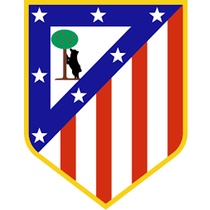 Welcome to the Atletico Madrid Football Shirts store where you will find all things Atleti. Here you can take a look at the latest sportswear home, away and training ranges as well as ones from previous seasons.

Showcase your support for your favourite team in La Liga by purchasing a replica home, away or training kit to the professionals.

Established in 1903, this Spanish football club has played for a total of 114 years as a united team, therefore have accumulated a large following of fans from across the world.
Atletico is now homed in their new stadium, situated north-east of Madrid city centre. This stadium seats up to 68,000 fans and is called Wanda Metropolitano. A new location for the club makes it a brand new experience for all supporters who visit in the coming years.
20km west from Madrid you will find the team’s training grounds where the professionals perfect their skills prior to league matches. Atletico Madrid also holds a sports academy in their training grounds for the benefit of aspiring football players. At the grounds you will find four pitches and a gymnasium as well as the reverse team’s home stadium Estadio Cerro del Espino.

As of 2001, the Atletico Madrid home, away and training football clothing ranges have been manufactured by the American giant – Nike. Atletico Madrid have recently renewed their contract with Nike to continue manufacturing their sportswear ranges up until 2026, however the cost of this contract has not been disclosed. With a 9 year contract together under their belts, Nike also feeds into the rivalry between Atletico Madrid and neighbours Real Madrid as their manufacturers are Adidas.
Nike are the sole designers and producers of Atletico Madrid’s kits which consist of home, away and training ranges, covering shirts, socks and shorts. Soccer Box is a licensed stockist of Nike sportswear so you are able to shop the team’s ranges and accessories within this Atletico store page.

Past manufacturers of Atletico Soccer Kits

Prior to 2001 when Atletico Madrid signed a contract with Nike, they have also worked with various other manufacturers for a range of different years. Their largest previous contract has been with Puma whereby they were partners for 7 consecutive seasons. However, with the extension with Nike, they will be partners together for 25 years.
• Meyba – 1980 to 1986
• Puma – 1986 to 1998
• Reebok – 1998 to 2001
• Nike – 2001 to present

Why Buy The Atletico Madrid Jersey From Soccer Box?

We stock the latest ranges of Atletico Madrid jerseys in a range of adult and kids sizes to fit a wide variety of supporters. As well as this, we often reduce previous season’s stock, so keep your eyes peeled on our Atletico store and bag yourself a bargain.
Take advantage of our extensive range of speedy international delivery methods and place your order today. As the current Atletico Madrid home soccer jerseys are a popular range, we have a limited amount in stock. Therefore, we suggest that you checkout now to secure yourself a bargain. Our helpful experts are happy to answer any of your queries or questions regarding your order, so give us a call if you require any assistance, our number can be found at the top of the page.
FILTER
Now Shopping by
Clear All
Shopping Options
Category
Brand
Price
Product Type
Season
Size
Compare Products
Compare
Clear All
You have no items to compare.