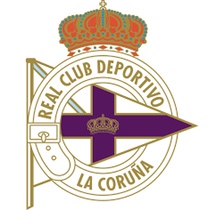 Display your support for your favourite Spanish team now by purchasing a new top adorned with their crest today!

In 1906, members of the Sala Calvet Gymnasium founded the soccer team – Deportivo La Coruna. After only a year of being established, the club was granted royal denomination by Alfonso X111 of Spain.
Located north of the A Coruna city centre is the Estadio Municipal de Riazor which is their home grounds. Seating over 32.5K fans, within the stands you are a guaranteed to see devoted supporters wearing the Deportivo La Coruna home shirt.

The Spanish football club signed a three year contract with Macron in 2017. Reportedly, the cost of this agreement was over half a million Euros per season. This price therefore, being worth double the amount spent with Lotto.
Covering the Deportivo La Coruna home jerseys, this partnership is due to expire at the end of the 2019/2020 season, which could either see the club extending or signing with another manufacturer.

We only stock official replica clothing which has been sourced directly from the respective manufacturers. Due to this, you can be certain that you are going to receive an authentic item of Deportivo La Coruna sportswear.
As we supply our customers with a selection of season’s clothing, we are sure to reduce previous year’s shirts. So we recommend that you keep your eyes peeled for amazing value discounts!
You can checkout using our online secure payment system now or give us a ring and place your order over the phone. To cater for the majority of our customers’ requirements, we offer an outstanding amount of speedy worldwide delivery methods. These ensure that your order reaches your door in no time at all, wherever you live in the world!
FILTER
Shopping Options
Category
Brand
Price
Product Type
Season
Size
Team
Compare Products
Compare
Clear All
You have no items to compare.