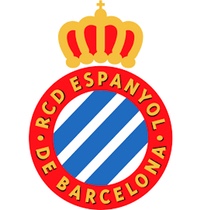 Thank you for shopping for Espanyol Football Shirts and Jerseys at Soccer Box. This is the place to shop for the latest home and away shirt. We stock the official Puma kits in adult sizes.

Espanyol is a professional soccer club, based in the Barcelona region of Spain. Espanyol does not have the following or success of their City rivals Barcelona FC however, it does have a significant and loyal following of fans. The Puma shirts flood the streets around the Estadi Cornella-El Prat stadium on match day, with fans keen to show their loyalty and cheer on the team.

The Espanyol shirts and jerseys are available to order and eligible for express and international shipping options!

Since the beginning of the 2012 season Puma has manufactured the club shirts, jerseys and all team apparel. Puma is a German sportswear brand, it manufactures football tops for a number of team’s around the world however, it’s presence in the Spanish La Liga has been limited. This new shirt deal is a fantastic step for both the club and Puma.

With Puma's artistic creativity at the helm of design, the football shirts and jerseys have been fantastic over resent seasons. Traditionally the home football jersey features blue and white stripes. These have been the team’s home shirt colors since 1910. Puma has experimented using thin stripes in their 1st seasons shirt, the 2013 - 2014 football shirt features much wider stripes and looks fantastic and is similar to the current shirt with the bold blue stripes making it a distinct Espanyol shirt!

The initial home shirt colors for Espanyol were yellow. In recognition of the history and heritage of the club yellow is often chosen as an away or third football shirt color. Whether, you prefer the traditional home shirt or the away shirt make sure you shop at Soccer Box for the latest tops and jerseys.

Espanyol has never won La Liga but has spent most of its history playing in this prestigious topflight of Spanish soccer. The major trophy wins celebrated by the team and fans have been the 4 Copa del Rey trophies won in 1929, 1940, 2000 and 2006. Espanyol has secured entry to several European competitions over the years, and was UEFA Cup runner up in 1988 and 2007. Playing in Europe has increased international recognition and support for the club. The vast majority of supporters are Spanish, however, the shirts and jerseys are sold around the world. At Soccer Box we can ship your Espanyol Football Shirts around the globe.

La Liga is becoming increasing popular around the world. At Soccer Box we strive to offer our customers one of the best selections of football tops available online. Have you ever thought of owning a collection of the must have jerseys, if so then Soccer Box is your one-stop-shop!