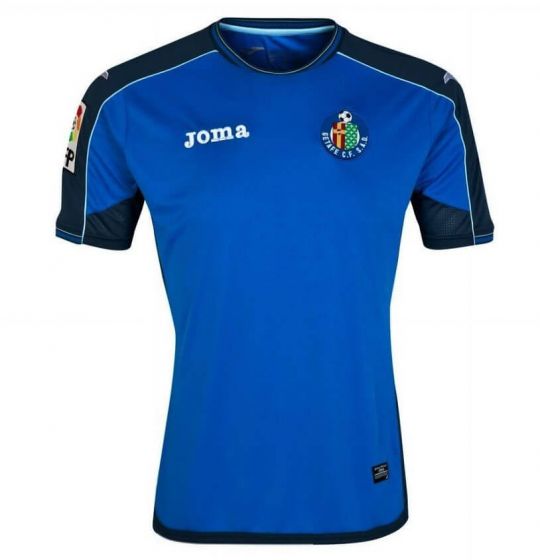 The Getafe Home Jersey 2014 – 2015 is the fresh new kit release from Spanish kit manufacturers Joma. The traditional design for Getafe is a plain blue football shirt for home matches and Joma haven’t broken ranks to produce something wacky and experimental, instead respecting the classic style and values of the team and the club as a whole.

Despite appearing minimalist in design the Getafe home shirt is a smart, comfortable football shirt. Joma offer top quality, and this is reflected by the quantity of top teams that they provide which many can be found here at the Soccer Box online store. To bring this quality to our customers we only deal with Joma directly, so all our Joma kits are official and authentic football products. With stock limited you really must be quick to get a Getafe shirt!

Getafe, known fondly as the Azulones – the deep blues – was only founded in 1983. The original Getafe Deportivo football club started in 1946 but liquidated at the end of the 1981/82 season due to financial difficulties, to be replaced a year later by a merger of two smaller Getafe sides that revived the Getafe FC club name. The city team is based just south of Madrid as part of the Madrid Metropolitan District, but are the only one of the four Madrid sides not to come from the capital itself. The others – Real, Atletico, and Rayo Vallecano – are all based in Madrid.

The Getafe Home Jersey 2014 – 2015 comes in a dark blue with navy shoulders running as a wide block of color down the short shirt sleeves. The bottom of the football shirt also features this trim, as does the mesh fabric to the underside of the arms. This is there to boost air circulation and reduce perspiration and rid subsequent odors.

The front of the shirt bears the stitched Joma name and the Getafe FC club crest, also stitched. Sharp eyed customers will note that there is no club sponsorship printing on the front. Spanish and Italian teams are notoriously late with announcing a sponsor, if they have one at all, and so the first editions of these Getafe home football shirts are plain.

The right shirt sleeve features the La Liga patch, and the back of the neck has a small Spanish flag. The bottom of the football shirt has the abbreviation GTF representing Getafe, in a dark print.

Joma makes their football shirts, such as the Getafe home shirt, from 100% polyester. This material is doubly beneficial because it is lightweight thus suitable for football and exercise, but also it’s highly durable against the typical wear and tear of football, be it grass stains and dirt, bad tackles, trips, falls, sliding around… the list goes on. The other benefit is that you can safely machine wash it clean after all of this.

At Soccer Box we have Getafe football shirts as part of our commitment to offering a range of teams across Europe in every big league. We also have related football shirts below for rival La Liga teams, browse through our menu to find your desired team and merchandise!

If they don’t take your fancy then use the Soccer Box shop menus to drop down a variety of leagues including Serie A and the Bundesliga for a wide range of new kits for rising teams. With colors and sizes to suit all there has to be something for everyone here, so don’t miss out!