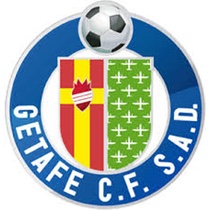 Welcome to the Getafe Football Shirts and Jerseys store at soccer Box. Here you can shop for official club jerseys. Home and away tops are available in a selection of adult sizes from S - XXL. Getafe is based in the Madrid region of Spain, the club has had an eventful history but recent seasons have seen them settle into La Liga and begin achieving some success.

1
per page
Set Descending Direction
10%
OFF

Proud of the Getafe history, order your shirts and jerseys at Soccer Box now!

The club was originally founded in 1946, however, they were reborn in 1983 after merging with Club Getafe Promesas. After working its way up through the Spanish football divisions Getafe finally succeeded to the topflight La Liga in 2004. This is an impressive achievement to go from the very bottom of the league to playing in the top flight in only 20 seasons.

Joma, a Spanish sportswear manufacturer, produces the clubs kits and jerseys. The traditional color of the home top is blue often with red, white or orange trim. The color of the away top is usually red but during recent seasons this has changed frequently. Check out Soccer Box regularly and keep up to date with the changing shirts. Ensure you always have the latest strip and order yours now!

Despite their struggles Getafe is a popular club team. Initially the majority of the team's support was based locally however, the fan base has expanded rapidly and supporters can be found around the world. The teams kits and jerseys can be shipped worldwide, so wherever you live you can get your hands on a top. Reports suggest that Getafe fans can be found as far afield as Scotland, Mexico and Australia.

The Spanish La Liga is becoming one of the most watched football leagues in the world. Getafe have not won the top-flight trophy however, their persistence may pay off. Astonishingly Getafe reached the Copa del Rey final in 2007 and 2008, a magnificent achievement for a team only recently promoted to La Liga. The fans wearing the teams shirts and jerseys have had much to cheer about over recent seasons. Getafe has maintained its La Liga position, even managing mid-table finishes and qualifying for European football. Get involved and order a top now!

We stock a great selection of La Liga tops, making Soccer Box your one-stop-shop, especially if you are keen shirt collectors.