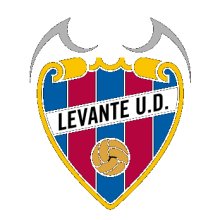 Welcome to the Levante U.D Football Shirts and Jerseys store here at Soccer Box where you can pick up the latest soccer apparel for your number one team! Available in a variety of men’s sizes from S to XL you are guaranteed to find the top to suit you here. Delivered direct from the respective manufacturer, we are able to confirm that your new investment in your supporting apparel is indeed authentic. So have a look below through our range of sportswear and treat yourself or your loved one today!

Established in 1909, Levante Union Deportiva was first registered as Levante Football Club and they were the most senior club to come out of Valencia. Ten years after Levante began playing, their closest rivals Valencia CF was then formed and quickly became their biggest rivals. During the Spanish Civil War Levante only managed to acquire a place with the top four teams after Barcelona pulled out to tour the Americas. And because of this Levante was able to finish the tournament in first place.

Unfortunately, as the Civil War was going one during their early years, Levante’s home grounds were sadly destroyed. But a team close by called Gimnastico had a ground but had lost a considerable amount of players, and this situation therefore lead the two clubs to merge and then they became known as Union Deportiva Levante-Gimnastico. However, shortly after that they regained their name – Levante Union Deportiva but they have acquired their signature colours and the nickname of Gimnastico ‘Granota’.

The home ground which Levante still plays at today is called Ciutat de Valencia which was formerly Gimnastico’s Estadio de Vallejo as it was replaced in 1969 by the new 18,000 seater stadium. Within this venue you will see a number of supporters donning the signature red and blue stripes of Levante to display their club spirit in its home.

After an unfortunate stint in 16/17, Levante has successfully made it through the La Liga and are returning for their 13th season overall. However, they have had to work super hard to be able to make it to the top flight league, and to do so they had took part in a number of leagues. Below we take a look at their biggest achievements within these tournaments over the years.

Taking over after Nike, Macron signed their contract with the Spanish soccer club in order to produce their sportswear for a total of three years which takes them until the end of 18/19.

It is believed that Macron wished to collaborate with Levante due to its links and popularity with Italy and they wanted to accompany the likes of Tommasi, Storari and Rossi as well known Italian connections with the Spanish club. Also, they also wanted to work alongside this club as they are the oldest football team in Valencia which makes them well known and supported by a number of generations.

Prior to the agreement with Macron, Levante UD has partnered with a range of sportswear manufacturers for their core collections. And looking at their recent history with brands they have not managed to secure a longer term deal than 3 years which makes looking at the appearance of the kits overtime engaging as they have all been interpreted by the producer differently. This feature also makes the shirts an excellent item to collect for supporters and fans across the globe.

As they are the oldest soccer club in Valencia, the Levante home shirt is sure to be a hit this season, so if you want to invest in one for yourself, we highly recommend that you do so quickly before it is too late. Within the checkout then you are given the option to select from our extensive list of shipping methods which operate worldwide at express rates to get your shirt to you as fast as possible, wherever you live in the globe.

If these aren’t good enough reasons to shop with us today, we also source all of our stock direct so that we can provide our customers with the official replica apparel by confirming its authenticity with the manufacturer. Along with this, we regularly reduce previous season’s stock and offer exclusive coupon codes to use towards your order. Sign up to our newsletter now to be kept up to date with all of the future deals!

FILTER
Now Shopping by
Clear All
Shopping Options
Category
Season
Compare Products
Compare
Clear All
You have no items to compare.