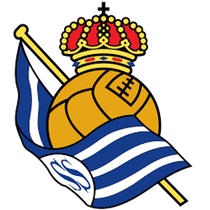 Real Sociedad is a Spanish football team based in the Basque region, they were founded in 1909 and have spent most of their history in La Liga, with occasional dips into the Segunda Division. We have now got the official Real Sociedad football shirts available to order. Shop for your jerseys online with Soccer Box, we offer competitive prices and worldwide delivery options

La Liga is one of the most competitive football leagues in the world, but Real Sociedad has maintained their place in the top-flight for the majority of their history. They have even claimed the title of Spanish Champions on two occasions, in 1981 and 1982. More recently, they finished in second position in 2003.

Consistently playing in the top-flight has led Real Sociedad to be well supported. In particular they have a large following in the Basque region of Spain. But throughout the country, and around the world demand for Real Sociedad shirts is high with many people choosing them as second team to support.

Since 2014 German sportswear brand Adidas has produced the Real Sociedad shirts. This is not the first time that the Adidas logo has adorned the teams jerseys and training kit, in fact Adidas was the clubs main sponsor in the 1970’s and 80’s. The fact that Adidas made the clubs kits at the time of their greatest achievements, with two La Liga victories and a Super Copa de Espana, it seems that the partnership might ignite further successes for the club.

The infamous home colours for Real Sociedad include a blue and white vertical striped football shirt. Adidas has stayed true to this heritage in recent incarnations of the home jersey. The blue and white colours were initially chosen as they represent the colours of San Sebastian, this areas flag is white with a blue square in the top right corner.

The away colours for Real Sociedad have varied over the years. Through the 1980’s and 90’s they often wore plain blue or white shirts to reflect the clubs traditional colour scheme. However, since 2000 red has become a more popular choice, with black also being chosen regularly, most recently in 2016/17.

Since 1993 home fixtures for Real Sociedad have been played at the Anoeta Stadium, which is in San Sebastain. This football ground has a capacity of 32,300. However, fans have often complained that the athletics track, which is part of the stadium, puts too a great a distance between the stands and the football field muting the atmosphere on match days.

Whether you attend games at the Anoeta Stadium or you support Real Sociedad from afar the best way of showing your support is with an official team jersey. We are supplied directly by Adidas ensuring that you are shopping for genuine Real Sociedad football shirts. We have limited supply so don’t delay and order your shirt today.

FILTER
Now Shopping by
Clear All
Shopping Options
Category
Brand
Compare Products
Compare
Clear All
You have no items to compare.