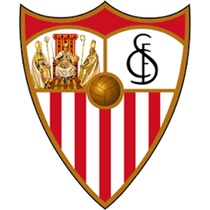 This is the Sevilla Football Shirts and Accessories store at Soccer Box. Sevilla is the oldest football club in Spain and was established in 1905. It has been relatively successful and enjoys a large and loyal following of fans primarily based within the Seville region of Spain.

One of the most popular football accessories is a team scarf. You can shop for a Sevilla scarf at Soccer Box. A scarf can be worn with your football shirt for added warmth, or waved at the match while cheering on the team. A scarf can also be hung up at home or displayed in your car to identify yourself as a proud supporter of Sevilla FC.

The home stadium of Sevilla is the Estadio Ramon Sanchez Pizjuan. This has been the iconic home of Sevilla and the team’s football shirts since 1958. The stadium was transformed into an all seated stadium several years ago and now holds 45,500 fans. Sevilla is the 8th best-supported team in La Liga and the stadium is packed with fans kitted out in the latest Sevilla football merchandise and accessories at every game.

If you are a fan of La Liga, Sevilla is a great choice of football team, they won La Liga in 1946 and has won the Copa del Rey on 5 occasions including in 2010. In Europe the Sevilla jerseys have been seen in the UEFA Europa League final twice, winning on both occasions in 2006 and 2007. European success has ensured that the Sevilla football shirts and accessories have remained popular in Spain despite the team failing to win La Liga for many years.

Many football fanatics choose to collect football shirts and accessories for clubs based around the world. At Soccer Box we aim to offer you one of the best selection of football shirts online, and some unique offerings that are often difficult to find.