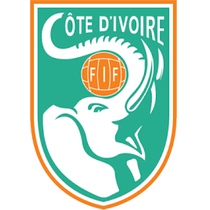 Football in Africa is exceptionally popular, and one of the most successful national teams to hail from the continent is Ivory Coast, also known as Côte d'Ivoire. Here at Soccer Box we are proud to stock a selection of official Ivory Coast football shirts, and you can order yours now. With the home and away jerseys available, low prices and fast worldwide shipping make us your first stop for all Ivory Coast merchandise.

The Ivory Coast national team played their first official International in 1960, and had a run of third and fourth place finishes in the African Cup of Nations during the 1960’s but real success didn’t arrive until later. Côte d'Ivoire has a strong record at the African Cup of Nations with consistent appearances, and they have won twice in 1992 and more recently in 2015.

The Ivory Coast football shirt did not make its first appearance at a World Cup Final until 2006, but they have since qualified for three consecutive tournaments. To date, however, they have never got past the group stage of the competition.

Since 2005, German sportswear manufacturer Puma has designed and produced the Ivory Coast football shirts. In 2015 they extended the deal to ensure that the Puma logo sits proudly on the nations jerseys until at least 2019. Puma has been the biggest player in manufacturing kits for African teams and their heritage inspired graphics have truly inspired the Ivory Coast squad and supporters.

The Ivory Coast home shirt is generally orange in colour, the away football shirt is usually green, these colours are taken from the country’s flag, which features orange, white and green vertical stripes. Made by Puma, recent jerseys have included graphic shoulder panels depicting images that reflect the values and culture of Côte d'Ivoire.

Some popular football players have hailed from the Ivory Coast in recent years including Dider Drogba, Wilfried Bony and Yaya Touré among others. These big names playing for popular European clubs from the Premier League and has also boosted the popularity of Ivory Coast in world football, and increased demand for the team’s football shirts.

If it is Ivory Coast football shirts you are looking for you are shopping in the right place. We are supplied directly by Puma guaranteeing that you are ordering genuine team jerseys. We aim to keep our prices low, and look out for regular discounts and special offers. Should you need to speak to us our customer service team are available by phone or email during business hours. And remember we offer worldwide delivery options to ensure a hassle free shopping experience for you.