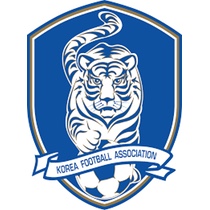 South Korea is a big team in Asian football, and is arguably the most successful. They played their first International in 1948, but it has been during the 2000’s that the squad has had most success. Official South Korea football shirts are now available to order online at Soccer Box. We have the home and away jerseys available, with low prices, discounts, secure online shopping and fast worldwide shipping make us your first choice for all football shirts.

At the beginning of the South Korean national teams history the squad proved themselves to be a formidable force in Asian football with consecutive wins in the 1956 and 1960 incarnations of the AFC Asian Cup. In fact, throughout their history if they qualified the South Koreans have rarely finished in less than third place, but to date they have only won twice.

The distinctive flag of South Korea provides the inspiration for the colours of the national team’s home and away jerseys and kits. For the vast majority of the team’s history they have worn a red home jersey, and the shorts have varied between red, white and blue. In 1994 a white home shirt was introduced, but the iconic red was quickly restored in 1995.

The away football shirts were generally blue until 2002 when a white away kit was introduced. Following their success at the 2002 World Cup South Korea has since stuck with white as it’s secondary kit colour.

Nike has been the long term supplier of the South Korea soccer jerseys, and has produced some fantastic designs including their most recent shirts for the 2014 World Cup. These jerseys offered a simple, modern design utilizing the red, white and blue colours to maximum effect.

FILTER
Shopping Options
Category
Compare Products
Compare
Clear All
You have no items to compare.