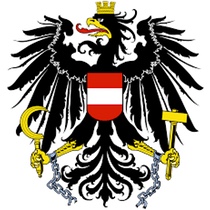 Here is the Austria Football Shirts and Jerseys store at Soccer Box. This is the place to shop for the latest, official soccer jerseys and other team merchandise. Austria isn’t one of the top ranking world football teams but they have qualified for 7 FIFA World Cup tournaments and 1 UEFA European Championship to date, hoping to increase that by qualifying for the 2018 World Cup.

The best competition result for Austria was 3rd place in the 1954 FIFA World Cup, the last time the shirt featured in the tournament was in 1998 when the team did not make it past the group stages. After qualifying for the 2016 European Championship and getting knocked out during the group stage, it is one of Austria's best results. If you will be supporting this national team during the upcoming World Cup tournament order the brand new home and away shirt right here at the Soccer Box online store.

Order your team shirts and jerseys with express UK and international shipping options!

The 1950’s and the 1980’s have probably been the most successful periods for the Austrian national team to date. They have had tough qualifying draws against the very strong football team in both the Euro 2012 and 2014 World Cup qualifying stages. After a confident qualification into the 2016 Euro's and getting knocked out by the tournament's underdogs, Austria will be wanting that love and support shown on their matchdays by wearing their latest shirts to encourage and spur them on for a victory in the upcoming tournament!

Puma is the manufacturer of the outfield kit. The initial colors of the home shirt were black and white, the team wore these colors up until 2004. In 2004 Hans Krankl decided that the black and white kits weren't unique to the nation and therefor are now red and white color, which are the traditional flag colors.

The national flag is red and white, these colors were adopted as the new home kit colors. Over recent seasons Puma has done a fantastic job of producing the brand new shirts. The latest soccer jersey in the red and white color scheme looks fantastic and is available to purchase in adult sizes here at Soccer Box.

Instead of discarding the original black and white colors completely, as a mark of the teams history and heritage these colors are used for the away shirt. Show that you are a true fan of the team and order your official team kits and soccer jerseys today.The national team play their home games at the Ernst-Happel-Stadion, this is the largest stadium in Austria and is based in the country’s capital city of Vienna. The stadium has a capacity of 68,500 and is the iconic home of the National team. Despite not having the greatest record in the world’s biggest tournaments home matches still attract a significant number of fans sporting the now infamous red and white home shirts and jerseys. Whether you attend matches or support from afar get yourself an Austria football shirt and show your national pride at every game.

Don’t forget that you can shop for hundreds of different shirts and jerseys online at Soccer Box. A latest shirt is a must have for any true football fanatic, so keep a check up on our online store to ensure you are up to date with your teams latest kits.

Shop for the latest Austria Shirts and Jerseys online at Soccer Box while supplies last!