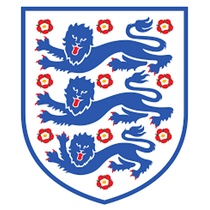 If you are shopping for the official Nike football kit for the England national team then you are in the right place. Here in our England kit shop you can order the latest home, away and goalkeeper kit, as well as training wear and accessories in a full range of sizes. From the England baby kit up to adult XXL in the England shirt, shorts and socks we have got the full kit available to order. We are supplied directly by Nike guaranteeing that you will get the genuine England football kit when you choose to order from us.

Why Pick the England Football Kit?

England is almost synonymous with football, and the England soccer kit is recognised about the globe. The English national squad are regular attendees at both the FIFA World Cup and UEFA European Championships. In Fact, since 1950 the England kit has featured in all but three World Cup tournaments, and since their first qualification in 1968 the kit has only been missing from four Euro Championships.

During such tournaments football fever ignites throughout England with supporters rushing to buy the latest kits and team merchandise. The most popular is the England home kit, that we stock here at Soccer Box. There is usually a song released to spur the squad on and, families and friends unite on match days to cheer the ‘Three Lions’ to victory.

While fans always passionately united behind the team, the England national squad has only scored 1 World Cup victory, in 1966, and have never progressed beyond the semi-finals in the European Championships. Below we list out the team’s best performances to date:

On the back of an outstanding performance at the 2018 World Cup, the England squad, along with the entire country, will be heading into Euro 2020, where many of the matches will be played on home turf, with high hopes of a great performance, and maybe even their first victory in a European Championship. Head over to our England jersey shop where you can see the full range of shirts that we have available to order.

Manufacturers of the England Soccer Kit

Since 2013 Nike has been the manufacturer of the England kit. The initial agreement between the English Football Association and Nike was for 5 years and worth £25million per year. In 2018 the deal was renegotiated, meaning that the infamous Nike Swoosh would adorn the England football kits for a minimum of another 12 year, up until 2030. This new deal was worth £33.3million per year.

Prior to 2013 the England kit was manufactured by a number of companies as follows:

As you can see, the English FA has had several long and successful partnerships since the 1950’s. Since Nike took over the England kit has consistently featured simple, yet elegant designs that have been popular with fans. In addition to the match day kits Nike also produce a full range of England training wear, that you can also purchase here at Soccer Box.

Over the years, the England team-sheet has featured the names of some of the best footballers in the history of the game. Looking back to the 1966 World Cup win, we could mention the entire squad as memorable players. Since then there has been a constant stream of some of the best players in the world to wear the England kit, making the job of picking our top five exceptionally difficult, however, we have narrowed it down to the list below.

With so many footballers to choose from it is likely that your list of 5 would differ significantly from ours. We love to hear from other football fans so why not look us up on social media and tell us who your top 5 England footballers of all time are.  And, get set for their next big match by shopping for an official Nike bag, scarf or hat over in England souvenirs store.

With the next big England fixture never far away ensure to order your England kit while stocks last. Shop now for the whole family, and add the England kid’s kit, adult jersey as well as training gear and accessories to your shopping cart. Checkout online using our secure payment processor and pick from UK next day or standard shipping options as well as International delivery methods. Make Soccer Box your first choice when shopping for the official Nike England football kit.