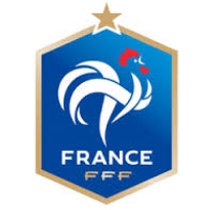 Welcome to the France Football Shirts and Jerseys shop. This is where you can shop for all the latest team gear including soccer jerseys, shorts, socks, training gear and other merchandise. We stock kids and adult sizes allowing the whole family to wear the latest France soccer jersey and support the team.

Why Choose the France Football Kit?

Often people buy the national team kit of the country they were born or live in, however, the success of the France national squad, and the worldwide popularity of many of the players means that their kit is worn by soccer fans around the globe. At major tournaments, but also for qualifiers and friendly matches fans show their support by wearing the official France football kit. The most popular kit is the home kit, and you can pick up the latest edition by visiting our dedicated France home kit shop.

FIFA World Ranking gives every national team a position in world soccer, since the system was introduced in 1992 the French national squad has consistently featured as one of the top teams, they were ranked in first position in 2001 and have featured 2nd and 3rd on 6 and 2 occasions respectively.  With success in both the FIFA World Cup and UEFA European Championship the French squad are well-known as a difficult to beat. Below is a list of the major titles won by France.

As the current FIFA World Cup holders, we expect the France kit to remain popular over the coming years, most fans choose to show their support with a football shirt, and you can shop the full range of official Nike France jerseys at Soccer Box. Get ready for the team’s next big match and order your France soccer kit today.

Manufacturers of the France Soccer Kit

As you can see the iconic Adidas 3-stripes adorned the French football kit for over 40-years, however in 2000 the FFF decided to partner with Nike after being offered a record kit deal for a national team. Initially France and Nike partnered in a €42.6 million per year deal that was set to run from 2011-2018. Their record-breaking deal was beat by the Adidas German contract that was valued at €45m per year in 2015. However, in terms of national team kit deals France and Nike once again took the top spot for highest value in 2016 when they agreed a new deal worth a staggering €50 million per year deal that would run from 2018-2026.

With success in both European and worldwide football competition it is obvious that the France national team has been gifted with some exceptionally talented footballers over the years. Below we pick out some of our favourite players to have been capped wearing the France football kit.

Who is your favourite France player of all time? Look us up on social media and tell us your thoughts. The current squad is packed full of well-known, popular footballers at the top of their game both at club and national level including players such as Olivier Giroud, Karim Benzema, Paul Pogba, Anthony Martial and many more. As the holders of the FIFA World Cup all eyes will be on France at the upcoming Euro 2020 tournament, could it back to back victories once again for the France national football team?

We are supplied directly by Nike, and only stock official France football kit. If it is the France junior kit, adult shirt or training wear you are after we stock the full range right here at Soccer Box. In our France accessories store, you will find official Nike team merchandise to use alongside your new football kit. Bur hurry, stock is limited, and the team’s ongoing success ensures that the France kit is one of the most popular in our online store. Get set for the next big game and order your France Euro 2020 kit today.