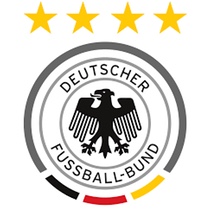 Looking for the official Adidas football kit for the German national team? Yes, then you are in the right place. Here in our Germany kit shop you can order the Germany shirt, shorts and football socks, as well as other team wear and accessories. Germany is one of the most successful team’s in International competition, and their kit always sells quickly, so whether you are shopping for the great value Germany kids kit or larger junior and adult sizes we have everything you need available for worldwide delivery.

Why Choose the Germany Football Kit?

The Germany kit has been a recurring feature in International football tournaments. In FIFA World Cup tournaments, the German kit has featured in all but two editions, they did not enter in 1930 and were banned in 1950. In addition to successive appearances, the German National squad has a strong history of success. Below we list the years in which they finished in one of the top three positions.

2018 was the German national team’s worst World Cup on record, they didn’t make it out of the group stages and ended the tournament in 22nd place. All eyes will be on Germany in Qatar for the 2022 World Cup. The best way to show your support is by wearing the latest team shirt, shop the full range of Germany jerseys in our online store.

UEFA holds the European Championship every four years, the first tournament was in 1960, but Germany did not enter a squad until 1972. Since their first entry once again the Germany football kit has featured in every tournament, with 1st, 2nd or 3rd place finishes at all except three tournaments – 1984, 2004 and 2004.  Below we recap the achievements of the Germany squad:

Coming up there is plenty of exciting football tournaments, including Euro 2020 and the World Cup 2022 so take this opportunity to invest in the latest Germany football kit. The most popular is the Germany home strip, which can be found in our dedicated shop by following the link.

Manufacturers of the Germany Soccer Kit

Adidas is the long-term manufacturer of the Germany kit. Adidas is a German sportswear manufacturer and their relationship is deeply embedded into German football history. Since 1954 the Adidas logo has adorned the Germany soccer kit. For a brief period during the 1970’s the kits were made by Erima a subsidiary of Adidas.

It may be a given that the German Football Association (DFB) and Adidas will continue to have a strong partnership, however there are still big-money deals discussed and renewed regularly. The current deal was initially negotiated in 2016, it was to last until 2022 and be worth 50 million Euros per year. In 2018, the DFB and Adidas renegotiated to extend the deal until at least 2026, the financial details have not been released. This means that the iconic Adidas 3-stripe logo will adorn the Germany football kit for several more major tournaments including Euro 2024 that is set to be hosted In Germany.

With such an impressive history of success, it goes without saying that the team sheet for the German national football team has featured the names of some of the best footballers in the world. Below we highlight some of our most memorable German players.

Whether a friendly, International qualifier or tournament match there is always an upcoming Germany match, so get ready for kick-off and shop for your official Adidas Germany kit before we sell out. With a full range of kids and adults Germany football kit to choose from make Soccer Box your one-stop shop. We offer worldwide delivery options for your convenience, and should you need assistance before, during or after placing and order our customer care team will be happy to help you.