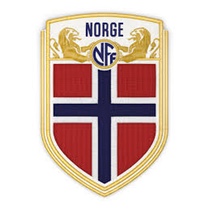 Welcome to the Norway Football Shirts and Jerseys shop at Soccer Box. Here you can shop for the latest Norway shirts and accessories. We only stock official merchandise and you are looking at the genuine Norway home and away football shirts and kit. We are supplied directly by the manufacturer, and aim to stock a wide range of products enabling you to get the kit that you want.

Nike took over as the manufacturer for the Norwegian national football team in January 2015, and will continue to make the teams shirts, shorts, socks and training kit until at least 2021. The Norway national team competes in the UEFA European Championship and the FIFA World Cup, they played their first international in 1908 and their most successful period was during the 1930’s.

Norway missed out on qualification for Euro 2016 following a play-off loss against Hungary. However, the latest Norway football shirt will be used during the qualifying campaign for the 2018 FIFA World Cup. Cheer the Norwegians onto their first World Cup qualification since 1998, and wear your Norway jersey with pride.

Grab your Norway Shirts while Our Supplies Last!

The Norway home kit reflects the colors of the Norwegian flag and is usually red, white and blue in color. Nike is well known for adopting the color scheme of a national team and giving it a modern twist to create unique, stylish but very patriotic football shirts. Look out for all the latest Norway shirt releases right here, and keep up to date with the latest trends.

The Norway away kit is generally white in color, with hints of blue and red to reverse the design of the home kit. Once again, Nike likes to maintain the overall color scheme and look of an national teams away kit, but often adds modern design elements creating new, stylish jerseys that are sought after by fans and football shirt collectors alike.

Despite not having the best record as a national football team, Norway does have one interesting point of note and achievement to boast. They are the only national team to have never lost a football match against Brazil. In four meetings with the five time World Cup Champions the Norwegian national football team has won two and drawn two. A great reason to justify the purchase of the latest Norway football shirt!

If you decide to purchase a Norway football shirt you are making a great choice to buy from Soccer Box. We ship jerseys around the globe and our shopping cart is fully secure. If you have any queries don’t hesitate to contact our customer service team who are on hand by phone or email during business hours to take your enquiries.