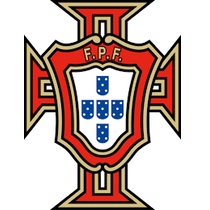 Are you shopping for the latest football shirt, shorts and socks for the Portugal national team? If the answer is Yes, then you are in the right place. Here in the Portugal kit shop at Soccer Box you can order the latest jersey, shorts, socks, kit and accessories for the Portuguese national football team. We are supplied by Nike, guaranteeing that you will get official merchandise. We stock junior and adult sizes, as well as the great value official Portugal kid’s kits for younger fans. So, whatever you are looking for we are sure we can help. With fast worldwide delivery options place your order online today and be wearing your new Portugal kit soon.

The Portuguese Football Federation (FPF) has had a long-term relationship with American sportswear brand, Nike. In fact, the infamous Nike Swoosh has adorned the Portugal kits since 1997. And, in 2017, twenty years into their relationship, the FPF and Nike announced an extension to their agreement until 2024.

Nike is well known for their beautifully designed football shirts, that incorporate traditional colour schemes with team heritage and a modern twist, and their take on the Portugal jersey, shorts and socks over recent years has inspired some fantastic kits. Of course, the Portugal home kit with its vibrant red and green colour theme is the most popular of the team’s kits and you can shop for yours here at Soccer Box.

Unlike club teams, the Portugal national team tend to have a new football kit approximately every two years. You will likely notice new Portugal soccer kit being launched in the run-up to major tournaments including the European Championships and FIFA World Cup.  Sign up to our newsletter if you’d like alerts for new kit launches straight into your inbox. Or take a look at our blog where you will also find posts detailing the new shirt, short and socks combinations when they arrive.

Why Choose a Portugal Soccer Kit?

In recent years the Portuguese national football team has really upped their game, catapulting themselves into the spotlight, and scoring some major successes. The result of this is an increase in supporters not just within Portugal but around the globe. This has made the teams’ kit more desirable, take a look at all the Portugal jerseys that we have available, they are selling fast, so order yours today to avoid disappointment.

Prior to 2002 the Portugal kit had only appeared twice in the World Cup finals, with the team finishing a respectable third in their first outing in 1966, the second appearance was twenty years later in 1986, when the team failed to make it out of the group stages. Other than those two outings between 1930 and 1998 Portugal failed to qualify. Here is a rundown of the years the team has appeared and their final position:

As can be seen, since 2002 the Portugal football kit has featured in every World Cup final, the team has not yet been crowned World Champions, but they are now seen as a strong contender.

Where Portugal has excelled is in the European Championships. In this tournament, again they failed to qualify for all but one tournament, which was in 1984, between the years 1960 and 1992. However, since 1996 not only has the Portugal shirt featured in every tournament, the squad has also been a strong contender for the top spot always finishing 7th place or higher. With glory being achieved at Euro 2016 when the Portugal national team won the trophy. Here is a list of the years that the Portugal soccer kit has featured in the European Championships to date, and the squads finishing position:

How did the Portugal national team go from no-where on the International football radar, to formidable opponents? The answer lies in the evolution of the squad. A quick scan through of the teams most capped players, and highest goal scorers reveals a raft of players whose careers spanned between the 1990’s and the present. Below we will look at some of the most famous names to have donned the Portugal football kit for their country:

Arguably, it has been the influence, skill and tenacity of Cristiano Ronaldo that has catapulted the Portugal team to success in recent years and has made the shirts particularly popular with junior football fans around the globe. Ronaldo is idolised by kids and adults, and his natural on-pitch talent has made him a worldwide sensation at both club and national level. You can of course purchase your Portugal shirt, for kids or adults, here at Soccer Box with official Ronaldo 7 lettering, or why not take a look at the Portugal training wear that we have available to shop the full range of clothing that you will see Ronaldo wearing when on duty for Portugal.

The Portugal football kit is one of the most in-demand football kits right now at Soccer Box. Whether you are shopping youth or adult sizes, home, away or training kit, shirts, shorts or socks we have got you covered. We only stock the official Nike Portugal kit, but supplies are limited so avoid disappointment and place your order online today. Our shopping cart uses secure Sagepay payment processing, our customer care team are on hand to help during business hours should you need it, and you can read reviews from our satisfied customers here. Place your order today and receive your new Portugal strip soon.