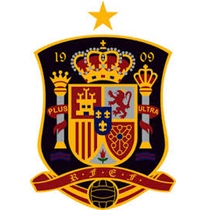 If you are shopping for the latest kit for the Spain national football team you are in the right place. Here in our Spain kit shop we stock the official Adidas Spain shirts, shorts, socks, training kit and accessories in a full range of sizes. We are supplied directly by Adidas guaranteeing that you when you order from us you will receive genuine Spain football kit. But hurry, whether it is the Spain kids kit, older junior or adult sizes the Spain soccer kit is always a popular choice, so place your order online today to avoid missing out.

Why Pick the Spain Football Kit?

Recent years have been some of the best ever for the Spanish national team. With some of the best players in the world on the team sheet Spain has wowed football supporters around the globe with their skill on the pitch and trophy winning style of play. This has meant that demand for the Spain football kit has increased dramatically with fans around the globe wanting to highlight their allegiance. The Spain home kit, which can be purchased here at Soccer Box, is undoubtedly the most popular option.

One of only eight teams to have ever won the FIFA World Cup, Spain can certainly be counted among the best national soccer teams in the world. They have also won the UEFA European Championship on several occasions. The highlight for the squad and the Spanish nation was winning back-to-back Euro championships with a FIFA World Cup in-between, making Spain the team to watch. Below we list the trophies won and in what year:

Cheer on the Spanish national team at their next big game and order your official Spain kit while stocks last. The most popular item to order is a match day jersey, and you can view the full range of available Spain shirts here. There is always a Spain game to look forward to with friendly fixtures, qualifiers and tournament games on the calendar, next-up we have Euro 2020, can Spain regain the title of Champions of Europe?

Manufacturers of the Spain Soccer Kit

Adidas is currently the manufacturer of the Spain kit, the iconic 3-stripe logo has adorned the Spain soccer kit since 1991. In 2019 it seemed that this long-term deal would abruptly end, with media reports stating that Adidas was considering taking the Spanish Football Federation (RFEF) to court for illegally terminating their deal early.

As it stood Adidas and the RFEF had a contract up until 2026, however the RFEF felt that the deal undervalued the Spanish national team. Due to not wanting to risk high-compensation payments the RFEF and Adidas renegotiated the deal for a further four years, meaning that the signature 3-stripes will adorn the Spain football kit until at least 2030.

Adidas may be the long-term partner of Spain now and into the foreseeable future, however they are not the only sportswear company to have had their logo on the Spain kit. Below we identify past manufacturers of the Spain kit and for what period they took on that role.

Alongside the match day Spain kit Adidas is also responsible for manufacturing a full range of other team merchandise. You can shop a selection of Spain training wear here; a jacket or track pants are ideal to wear alongside the latest football shirt. Or head over to the Spain merchandise store and pick up a hat, scarf or soccer ball all designed in signature team colours and adorned with the Spain badge.

With World Cup and Euro Championship wins it is clear that the Spain team-sheet has included some fantastic footballers over the years. Below we pick out some of our favourite players to have worn the Spain football kit. Why not look us up on social media and tell us who some of your top Spain players are and why.

From the Spain junior kit, youth and adult size shirt, shorts and socks, training gear and accessories you can get ready for the next big game involving the Spanish squad by ordering the latest Spain kit here at Soccer Box. Choose the items you require, click add to cart and checkout online using our secure payment processor. We offer fast worldwide delivery options and our exceptional customer service has helped us to secure our best in category 5* Trustpilot rating, you can read reviews from other customers here, and please do consider leaving us a review of your own after you have received your Spain football kit.