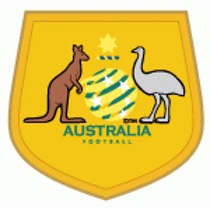 Are you shopping for the perfect gift for an avid supporter of the Australian national soccer team? Then look no further than this Australia football shirts and jerseys page here at Soccer Box. Stocking all of the latest and historic quality sportswear for the Socceroos, you are guaranteed to find what you are looking for below. We hold a direct contract with Nike who currently manufacturer the team’s shirts, so that we are able to supply our customers with the authentic replica apparel for their beloved team. And with our fantastic array of international express shipping methods, what more do you need? Fill up your basket with official soccer clothing today and you could be donning the matching jersey to their next fixture!

The Australian national football team has been in collaboration with American sportswear giants – Nike for a number of years. Their contract first began in 2004 after the team made the switch over from Adidas. And after producing their home, away and training collection for 8 years, they agreed to extend their contract further. So as of 2012 the Australian football team extended their partnership with Nike for a further 11 years taking them to 20 consecutive years together. As a result of this extension, Nike has now become the Australia national team’s longest single financial commitment with a sports manufacturer.

Within this collaboration contract, Nike is set to produce the player’s shirt, shorts and socks along with all of the fan and replica gear for the foreseeable future. At the beginning of each significant season such as a FIFA World Cup or AFC Asian Cup there will be a whole new set of sportswear released by Nike for the Australia national football team.  Those which will be available here to buy at Soccer Box will be the replica signature gold and green home collection along with the away, training and accessories in a variety of sizes.

Unique Styling of the Home and Away Kits

In the beginning, the attire worn by the Australian soccer team was a sky blue football t-shirt with white shorts and deep red accents on the socks. This colouring was therefore heavily influenced by the design of the country’s flag. However, in 1924 they stepped away from this political inspired scheme and adopted a more cultural approach which paid homage to their nation’s nature. This change was greatly welcomed by supporters as they felt that the shirts, shorts and socks became more unique to them by incorporating the beautiful colouring of the Wattle Tree into the kit. The golden blossoms of the tree were the inspiration for the base colour of the home soccer shirt and the leaves were depicted through the deep green accents. From then on this was the set appearance for the Australia home kit and the away was produced in reverse to the signature design.

Another unique aspect of the Australian jersey is that their crest is much more detailed to that of other countries. Inspired by the Coat of Arms of Australia, their crest features a kangaroo and emu situated either side of a shield containing a number of significant elements. Split into two rows of three, the top of this shield features the badge of New South Wales, Victoria and Queensland. Below this then is the emblem for South Australia, Western Australia and Tasmania. This unique addition to the crest incorporates all of the federation states in the country surrounded by native wildlife.

Over the years the Australian football squad has welcomed many successful players who have thrived in the club. Each and every one of these players has therefore donned the signature gold and green home and away kits for Australia during their career. Although we have seen many of these members move away from competitive play, there are still quite a few notable names which still cap for their country. Below is a list of some of the most significant members of the squads over time.

At Soccer Box we strive to ensure that we are providing our customers with 100% satisfaction. And this is why we only go direct to the manufacturer to source our stock of these Australian football club jerseys. As a result of this, you are able to feel an optimum level of confidence and assurance that you are certain to receive an authentic genuine garment adorned with the Australian crest. However, our supplies of the Australia home shirt are very limited, so we highly recommend that you complete your order with us today before it is too late!

Along with premium quality sportswear you are also able to pick up the famous Australia flag to finish off your display of allegiance during soccer games this upcoming season. So fill your basket with amazing value produce and finalise your purchase now via our secure payment system. And to ensure that your parcel reaches your doorstep rapidly, our extensive range of speedy worldwide delivery services are second to none.