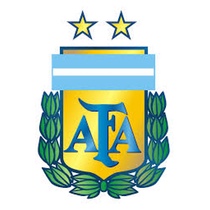 Welcome to the Soccer Box Argentina store. Here you can shop for all the latest home and away soccer jerseys, shorts, socks, official training kits and a selection of other football accessories and merchandise. The Argentina jerseys are 100% Official and supplied directly to us from Adidas.

The traditional color for the Argentina home jerseys has always been light blue and white. In 1911 they first appeared wearing a new top with the vertical blue and white stripes that are still famous today. Adidas is the current manufacturer of the Argentina shirts and training kits. Adidas became the team’s main kit manufacturer in 1974, a recent renegotiation of the contract will see the famous Adidas logos emblazon the soccer jerseys until at least 2022.

Shop for official the home and away Argentina shirts and team kits.

The current Argentina national team has been very successful in the Copa America competition; they have won this tournament on 14 occasions. They have also won the FIFA World Cup twice and have also won the Confederations Cup. Along with one other team they are the only team to have won all 3 the most important trophies, as recognized by FIFA, the World Cup, the Confederations Cup and the Olympic Tournament.

The Argentina soccer jerseys are very popular with supporters around the globe. Current star Lionel Messi is raising the teams appeal and profile further. He has been likened to the infamous Diego Maradona, who also wore the Argentina kit, he is considered as the one of the worlds best ever players. He played in the team when south americans last won the World Cup in 1986. The Messi team Argentina shirts are selling fast. Messi was named as captain in 2011 when Alejandro Sabella took over as the Argentina team manager.

Whether you are looking for the latest Argentina home kit, a tracksuit or hoodie, or simply a flag to wave to show which team you are supporting you are sure to find something suitable at Soccer Box.