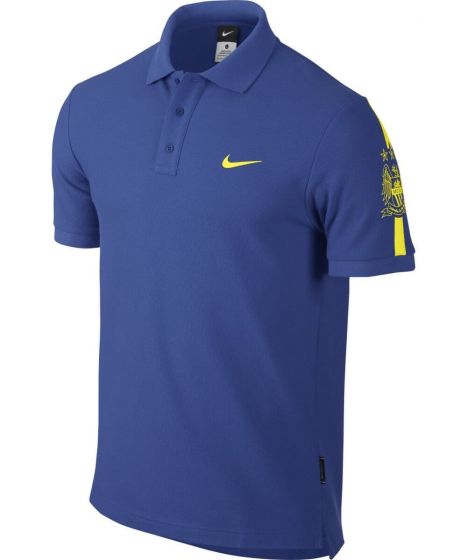 Take a break from wearing a replica football shirt and look cool in this darker blue polo shirt. This piece of training wear will be worn by top players like Aguero, Yaya Toure, and Kompany as they perform casual club duties such as meeting the press or charity events.

We stock the Nike polo shirt directly from the manufacturer themselves. At Soccer Box we have a licensing agreement which means that Nike send their top quality official merchandise from their European Distribution Center to our warehouse, from which we can send it on again to our loyal customers.

A fast international shipping service will see your gift order race across the world to you in no time at all. We charge no tax on orders from various regions which are exempt! Customers in the UK receive free shipping when spending £75 or more as well so there are plenty of reasons to get behind Soccer Box today!

Manchester City are the current reigning champions, having won the Premier League title last season and two seasons before that. The club has seen its fortunes improve dramatically since financial takeover in 2008 and the results are obvious; the team consistently reaches the top four of the league and qualifies for the Champions League annually. The effect is a regular attraction of the high caliber football players to dazzle fans and win valuable points and trophies, which is exactly what the new owners wanted to achieve and what has endeared them to fans compared to other clubs and their foreign ownership.

The Manchester City polo shirt is a dark blue in color, somewhere between a royal blue and navy blue. The style of the polo shirt is the same template as used for other Nike football teams to make mass production easier.

The training football shirt is a casual polo shirt with short shirt sleeves. It has a folded collar that is ribbed for comfort and three buttons to adjust the size of the neck. The design of the Manchester City polo shirt is simple and minimal, with only a printed yellow Nike Swoosh on the front and the Man City football club crest on the sleeves.

Normal football club training wear is made from 100% polyester to be great under duress and to keep you warm. The Manchester City polo shirt is made from 100% cotton. The material is still safe to wash and resilient to wear and tear but the training football polo shirt keeps you cool and is exceptionally lightweight, ideal for casual wear.