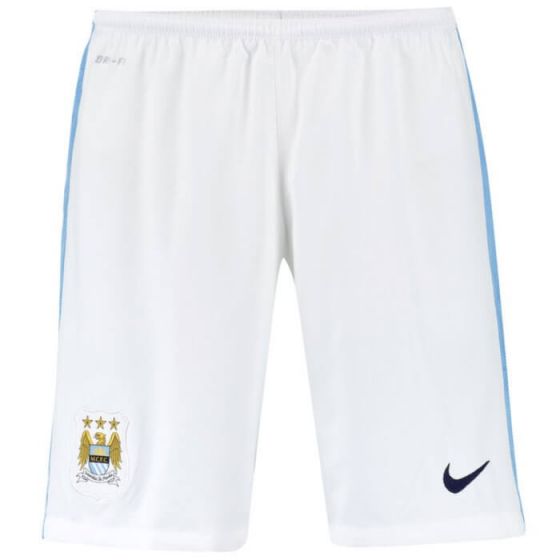 Other Customers Were Interested In
Details
Just released by Nike are the new Manchester City Home Shorts 2015 – 2016. The shorts are official licensed replica football shorts of the shorts used by the Manchester City soccer team this season. If you are after the latest 2015 – 2016 Manchester City soccer kits then Soccer Box is for you. We can supply the new home shirt, shorts, socks and much more.
For 2015 – 2016 Nike have continued their partnership with Manchester City and the they have designed the shorts to look fantastic while ensuring the shorts are comfortable and packed with the latest sportswear technology. At Soccer Box the Man City home shorts are available in a range of sizes so any Manchester City fan can support their club.
Man City Home Shorts 2015 – 2016 Product Details:
• Manchester City football shorts
• Part of the 2015 – 2016 home soccer kit
• White with blue stripes
• Dri-FIT moisture wicking material
• 100% Polyester
• Machine washable
• Fast worldwide shipping
• Official Nike soccer shorts
Manchester City is an English club football team that play in the Barclays Premier League. The team are one of the best teams in England and Europe and attract some of the best football players in the world. Last season the Man City fans were left disappointed as they lost their Premier league title and played poorly in the UEFA Champions League. With some big name signings 2015 – 2016 looks like being a success for Manchester City.
The Manchester City soccer shorts are in the team’s traditional home kit white color. The side of the shorts are sky blue that perfectly complements the Manchester City home shirt that can also be ordered at Soccer Box. As an added special touch you can personalize the shorts with official Premier League shorts numbers.
The front of the home shorts feature the Manchester City club crest that has been expertly stitched. The Nike Swoosh is alongside in navy. Nike has made every effort to engineer the shorts to the highest standard. The waistband of the shorts is adjustable and the shorts have been manufactured from 100% polyester. The material used to create the Polyester shorts has been acquired from recycling plastic water bottles which is part of Nike’s policy of using sustainable materials.
Mesh fibre material around the rear and side of the shorts will ensure air circulates around the shorts so you stay feeling fresh. In addition Dri-FIT moisture wicking materials will drag sweat away from your skin so you can perform on the football field.
At Soccer Box we only supply 100% authentic football merchandise. We have a direct account with Nike and we receive all our Manchester City Nike products from the Nike European warehouse so you can be assured to get the proper licensed Manchester City soccer shorts.
Make Soccer Box your number 1 choice for all the latest Manchester City football products. We can deliver anywhere in the world and are proud of our reputation for offering outstanding customer service.
Size Chart