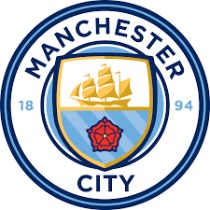 When you support a football team you normally want the latest gear especially when you are going to a football match. Here in our Manchester City training jacket shop you are sure to find a Man City jacket that will suit you whether you are buying for an adult or a child. We stock the official Puma Man City jackets in junior sizes for kids age 7-14 years, and adult S-XXL.  There is no better feeling than when you see the team players wearing the same jacket as you.

At present the Manchester City jackets are made by German sportswear manufacturer Puma who have delighted us with their range of stadium jackets in purple and pink which are available in kids and adult sizes.

The Man City stadium jackets are designed in such a way that they complement the actual playing kit for the current season. When training you will often see the players come onto the training ground and start to warm up, after a short while some of the players will discard their pink or purple stadium jackets to display a matching training top or a similar vest, you can also shop the complete Man City training wear range with us.

Buying a jacket is a fantastic choice for supporters. Coordinating with the match day kit, your Manchester City jacket can be worn alongside the home or away shirt further highlighting your team allegiance. The Man City jackets will add an extra layer of warmth on cooler game days or training sessions, and as they include performance technology, they will help you maintain a stable body temperature and wick away sweat ensuring you always feel comfortable.

Prior to Puma supplying Man city with their training kit the contract belonged to Nike who manufactured their Anthem jacket range which was very popular with Manchester City supporters both adult and kids.

In the last season that Nike supplied jackets to Man City the navy any blue anthem jacket went down very well with supporters, the main body of the jacket was navy with sky blue sleeves which had flashes of navy inset into the sleeves to give the jacket a dazzling effect. The new Puma Manchester City stadium jacket is available in multiple colourways and is proving to be equally popular with supporters.

When buying a Manchester City jacket or even if you would prefer to buy the older versions such as the Nike Manchester City squad jacket why not match them up with the pants. This would be ideal when going to the gym, training on the field or everyday wear. Head over to our Manchester City kit shop where you can view the full range if official Puma merchandise available for the Citizens.