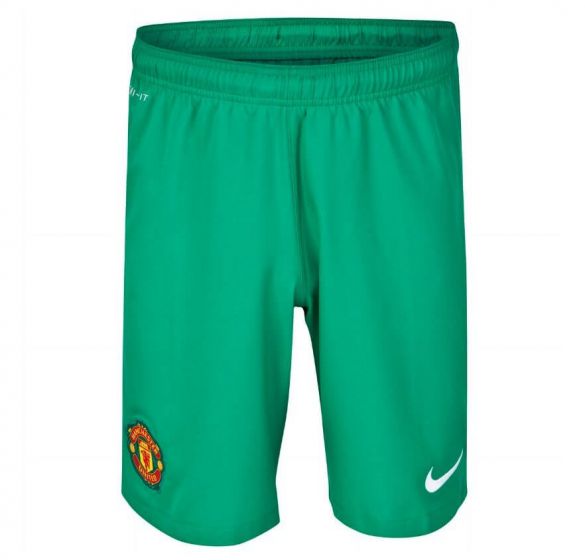 The Manchester United Goalkeeper Shorts 2014 – 2015 are part of the new season’s primary goalkeeper kit, to be worn by De Gea, Lindegaard, and Amos as the first choice goalkeeper football shorts. The green color is a typical choice for United for a bold style to distinguish the shot stopper.

The pure green goalkeeper football shorts are an official club product, licensed for Soccer Box and sent directly by Nike to our warehouse meaning you can trust you’re getting an authentic bit of kit. We dispatch all of our orders on a fast international shipping service so there’s little waiting around, and with no tax for orders from non-EU countries, you definitely don’t want to miss out!

The club has signed hot prospect Luke Shaw as replacement for Patrice Evra, as well as Ander Herrera being brought in to finally fix the midfield crisis at Man Utd. With the rumor mill forever turning though, it’s going to be a mad final stretch of the transfer window as Manchester United football club look for a new Center-Back and maybe even another midfielder.

The goalkeeper shorts are a straight forward piece of kit in a one-color bold green. The waistband of the football shorts is elasticated for a comfortable fit that’s snug but not tight, and sturdy enough not to fall down thanks to the in-built drawstrings. The Manchester United club crest is stitched onto the shorts as well as a white Nike Swoosh logo.

The goalkeeper football shorts are made from 100% polyester. This is great for football kits because it’s lightweight, so not a burden, and durable against damage from constant diving and clashes with players in the box. The goalkeeper shorts can be machine washed for a quick, hassle-free clean, but please consult the product labels for guidance.

Nike has a sweat wicking technology called Dri-FIT. This is indicated by the little white trademark beneath the waistband and it is a special science that draws perspiration and moisture away from the body, into the fabric of the goalkeeper football shorts, and is then sent out and away as evaporation.

At Soccer Box we have the new Manchester United football shirts to accompany a purchase of the goalkeeper shorts. We stock both of the new goalkeeper kits, as well as the new home and away strips. You can find sizes for adults and children as well as leftover stock from the 2013 – 2014 season and Manchester United football merchandise such as souvenirs. Whatever you can to display your love of the Red Devils, we have something for you!