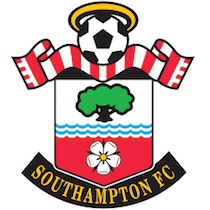 Southampton FC is a Premier League football club also know as the Saints. Here at Soccer Box we stock a selection of official Southampton football shirts that are available for worldwide delivery. Southampton FC was formed in 1885, and has a history as a church club hence the infamous nickname. The clubs shirts are popular with fans and you can shop for yours here.

1
per page
Set Descending Direction
33%
OFF

Following a stint in the second tier of English football Southampton made a return to the Premier League in 2012 and has since clawed their way up the standings to achieve a fantastic 6th place finish in 2016.

Over the year’s Southampton FC has had a number of football kit suppliers. From 1974-1976 Umbro made the team’s shirts, with Admiral, Patrick, Hummel and Pony all taking a turn or two each before a comeback for Umbro as recently as 2010. Adidas manufactured the Southampton football shirts in 2013 and 2015, but for the 2016/17 season a brand new supplier has come on board.

Under Armour an American sportswear manufacturer, that has been gaining popularity and momentum in Europe over recent years has agreed a 7-year deal to design and produce the Southampton football kit. This is an exciting time for the club and fans as Under Armour has pledged not only to design fantastic match day kits for the first team but also to aid in the development of the club in other ways.

The next 6-years is sure to see the launch of exciting new home and away football kits for Southampton FC, which includes shirt, shorts and socks that are engineered for style and performance on the soccer field.

However, in addition to kits Under Armour has pledged to assist with the development of the clubs academy, which will hopefully result in some bright, new English talent emerging up into the first team. There will also be a focus on developing women’s football at the club.

2016/17 and onwards is an exciting time to be a fan of Southampton football club, can the partnership with Under Armour nudge the club closer to the top of the Premier League table and their first top-flight trophy since 1984?

Take this opportunity to affirm your support for the club and shop for a Southampton football shirt here at Soccer Box. We stock kids and adult sizes, and you can choose to have your jersey printed with official Premier League lettering and/or sleeve patches for a small additional fee.