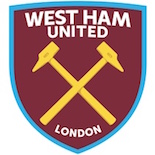 West Ham United is one of only eight clubs in English football to have never dropped below the 2nd division, and has spent the majority of seasons playing in the top-flight. Their consistency has ensured that the team has remained popular, and the West Ham United Kit is easily recognisable in the South East of England but also throughout the country. You can shop for the home shirt, shorts and socks here at Soccer Box, but hurry stock is limited place your order today.

The first ever West Ham Kit was navy blue in colour, however the team wore varying colours during the early years of existence. The club was originally known as Thames Ironworks and their house colours of sky blue and claret were officially adopted in 1899.

The story of the emergence of the colours for the WHUFC strip is often disputed with tales of winning a set of Aston Villa home strips following a bet. Others say that Old Castle Swifts FC, who was the predecessor to Thames Ironworks, used the colours from 1892. It is clear that the claret and blue colours are an integral part of the club and their home strip, no matter how they came to be.

Umbro is the official supplier for the hammers manufacturing all three of their kits, training gear and accessories. Umbro has maintained the iconic look designing claret home football shirts with blue sleeves adding alterations to the neckline and trim to update the look each season.

For the beginning of the 2016/17 season WHUFC has moved into their new ground - The London Stadium. Following their new contract from 2015 Umbro first designed a commemorative kit for the team’s final season at the Boleyn Ground, which they had inhabited since 1904. The 2016/17 kit was designed in recognition of their new start at the new stadium.

The London Stadium - formerly known as the Olympic Stadium, as it hosted events at the London 2012 Olympics, has been renovated over recent years making it into a high-spec ground for the Hammers. The stadium has a capacity of 60,000, almost doubling the amount of fans that can watch West Ham United at home fixtures. The club has signed a 99-year lease for use of the stadium.

The club is clearly setting up for a long future of Premier League football. They have yet to win the top-flight title, but it seems that we may see them as Champions sometime in the near future. Making now the ideal time to invest in team merchandise and the home strip is the ideal choice.

We have the full strip including shirt, shorts and socks in kids and adult sizes as well as the West Ham away kits We are supplied directly by Umbro guaranteeing that you are shopping for official team merchandise. WHUFC is increasingly popular, and these kits are selling fast so don’t delay order today, and remember we offer worldwide delivery options for hassle free shopping.