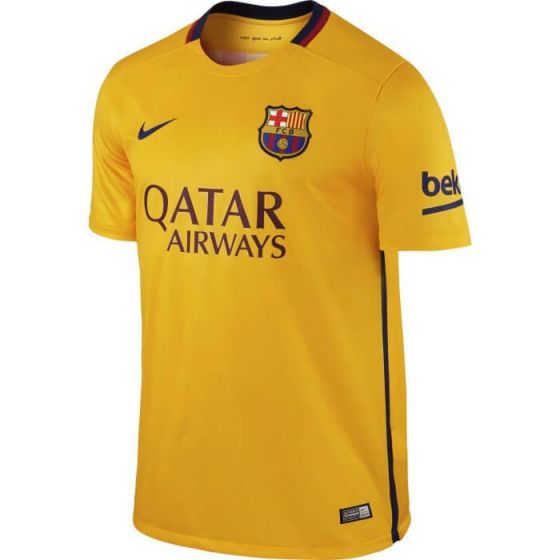 Details
Soccer Box is pleased to announce we now have available the Barcelona Away Jersey 2015 – 2016. The football shirt will be worn during Barca’s away soccer matches in the 2015 – 2016 football season when they attempt to retain their La Liga and UEFA Champions League titles they claimed last season.
The Barcelona football team have once again retained their association with Nike as their football kit supplier. Nike have been supplying the Barcelona football jersey since 1998 and the two companies work very closely to ensure this seasons’ Barca away jersey looks fantastic and fits in with the core values of FC Barcelona.
Barcelona Away Jersey 2015 – 2016 Features:
• Official Barcelona football jersey
• Part of the 2015 – 2016 Barcelona away football kit
• Short sleeved jersey
• Embroidered club crest
• Vibrant yellow in color
• Detailed Barca red and blue striped pattern
• Red stripes on the back of the jersey
• Made from 100% polyester
• Fast delivery
• Official Nike merchandise
The Barcelona away football kit for 2015 – 2016 has gone back to the club’s roots with a vibrant yellow color scheme. The away soccer shirt is a smart short sleeved design with a stylish crew style neckline giving a modern feel to the away jersey.
Barcelona is the capital of the Catalan region of Spain. FC Barcelona has long been a supporter for the Catalan region to gain independence from Spain. The back of the current away shirt features large red and yellow stripes that are the flag colors of Catalonia that will ensure this away jersey will be a massive hit with the fans.
The club football crest is proudly featured on the chest of the away shirt. The Nike Swoosh is alongside in blue stitching. The clubs home kit colors are featured on the away shirt around the collar and a blue stripe is on the side of the away soccer jersey.
Since 2013 Barcelona has featured a commercial sponsor on their football shirts that has upset some of their fans. Once again for 2015 – 2016 Qatar Airways is the main soccer kit sponsor and is printed on the front of the away jersey. Further shirt sponsors feature UNICEF that is on the back and BEKO that is printed on the sleeve of the away jersey. On the other sleeve is the LFP patch that symbolises the clubs position in La Liga.
Nike is known for leading the sportswear industry and this away jersey is packed with the latest technology. The kit is designed from 100% Polyester, and the material has been sourced from recycled plastic bottles. The shirt, shorts & socks that make up the entire Barcelona away kit feature Dri-FIT moisture wicking design that will keep you sweat free and comfortable. For playing football and supporting the team at away fixtures this yellow and red FCB kit is a must have purchase.
When you order from Soccer Box you are guaranteed to get an official product. We are supplied direct from Nike and the away jersey features a stitched Nike authentication label.
If you are a fan of Messi, Suarez or any other Barcelona soccer player then why not add that special option to personalise the away shirt with official Barcelona letters and numbers. Our printing technicians are highly experienced so you will get the perfect result.
Order your Barcelona away shirt at Soccer Box today. We offer a fast global delivery service at a fantastic price.
Size Chart